Thomas Dolby’s blog continues to induce rabid gear lust. After drooling over Mr. Dolby’s live rig and repurposed vintage MIDI controller, we now get a glimpse at Johnny DeKam’s live video rig. (Kevin Johnsrude caught this one, and reminds us that “envy is one of the seven deadly sins.” Better keep that in mind.)

Actually, we can divide this into “things to envy” and “things to note.” 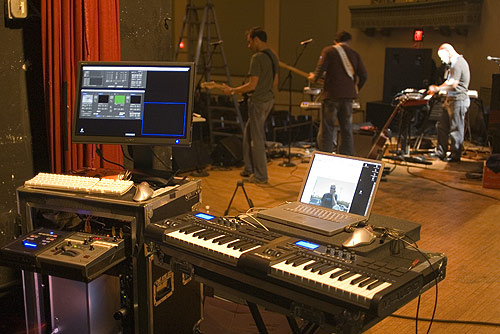 Things to envy: 5,000-lumen projectors, a racked maxed-out dual-G5 with non-stock video cards, and a visual artist with years of experience building software for just this sort of thing.

Things to note: a lowly 2,000-lumen projector bathes Thomas Dolby in projections, the keyboards are very-affordable twin M-Audio Axioms (perfect for VJing work thanks to built-in drum pads), and the software is all built in Max/MSP/Jitter. DeKam takes advantage of a relatively new feature of Jitter, which is the ability to manipulate video on the graphics card instead of the CPU, a technique he explains on the site. Usually you would associate this with 3D work and gaming, but oddly enough by mapping video as a 3D texture, you can get far greater video performance than you would on a CPU. (In other words, live visuals doesn’t have to mean ugly 320×240 video any more.)

If you’re interested in doing the same thing, check out the Jitter tutorials. This is a feature I think you can expect in other software, too, particularly since several major VJ apps are built in Jitter. I’m also working on a simple tutorial patch that demonstrates how to do this in a little more detail than the Jitter docs provide; expect that early this summer.

Oh, speaking of the term “VJ,” Johnny DeKam doesn’t like it, calling it video instrumentalism or live cinema. I’m very sympathetic to that, but I don’t think either term is likely to catch on. If you want VJing to mean more than raver eye candy, why not just apply the term to a broader range of live visual art? (Though if anyone has a suggestion for a better name and how to make it catch on, be my guest. In the meantime, VJ it is.)

Anyway, forget the terms: while this rig is certainly drool-worthy, I think it’s fantastic news that a lot of these tools are fairly accessible. (Jitter is pricey, though some of you already have it, GRID is cheap, Quartz Composer is included with Mac OS X in the developer tools, and Pd and Processing are both free alternatives to Jitter.) The more people working with these tools, the broader the definition of live visual performance will become, and that’s good for everyone as this medium tries to earn new respect. And musical expression can find a new multimedia venue with live digital visuals. Hey, it worked pretty well for opera.

I expect we’ll hear more about this particular rig, as music maker M-Audio is now establishing Johnny as their first sponsored artist, much like Vidvox has done in the past. Stay tuned.

There’s a lively discussion of open-source software solutions to many of these problems, particularly doing live visual performance, on the forums.