In our last episode, I was assembling my fantastic new portable Shuttle PC in glorious comic book form. I got as far as booting Ubuntu Linux off a CD, but obviously I wouldn’t want to stop there. Next steps: getting the onboard NVIDIA RAID working, and making a lean, livable Windows XP install I won’t hate (always a great reason for building your own machine). Happily, both problems have a single solution: nLite. (Shown below, with its awe-inspiring tweakability.) 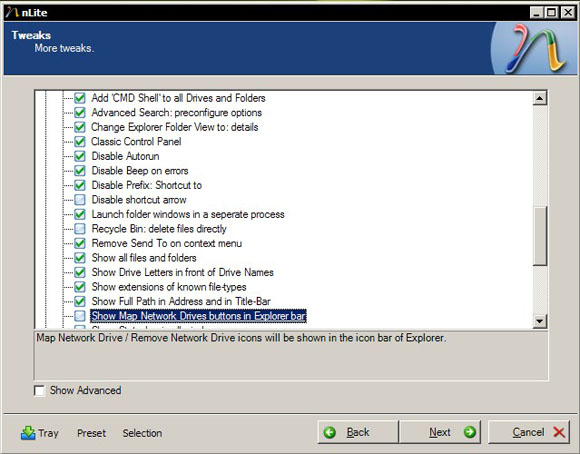 Sorry, no comics this time. But if we can save time installing and tweaking Windows, we’ll have more reason to read real comics.

A quick review: RAID is a way of arraying storage for improved performance and/or redundant data storage (for saving your data in the event of catastrophe). The two most popular forms are RAID 0, or striped, which can improve performance by writing and reading to two drives at once, and RAID 1, or mirrored, which stores redundant data on both drives in an array. Since drives are dirt cheap at the moment (my 300GB Seagates went for US$90 each), I chose to mirror , even though that requires twice as much storage. That doesn’t mean I’m safe from data loss, but more on that in a moment.

You may be surprised to here a Small Form Factor (SFF) PC has RAID at all. Some of NVIDIA’s nForce boards are RAID-capable via what most would consider a “software RAID.” The board does have a “RAID controller”, but it’s not a true, dedicated controller; you connect the drives as you would a normal SATA chain (in other words, you just hook those suckers up — see the comic). Some software RAIDs also require the CPU to share in reading/writing, but NVIDIA’s is apparently independent of the CPU. Software RAIDs are also much cheaper and easier to squeeze into an SFF machine.

Software RAID does have significant disadvantages: first, it tends to be harder to configure because you rely on the software RAID drivers to operate, and second, it’s not as reliable as a redundant storage solution as a dedicated RAID. Still, theoretically, you should be able to restore in many cases when one drive in the array fails, and while threads like this one include some disgruntled users, more experienced users seem to be able to get better results. Regardless, I would never use a RAID as a substitute for backing up; it should simply be considered an extra precaution. If it saves you once, especially for a machine built to go on the road, it’s worth the $90 for that extra drive.

But what about configuration? On Windows, the most annoying problem is having to install NVIDIA’s drivers from a — gasp — floppy drive. Now, I happen to have a USB floppy drive here for dealing with legacy drivers and emergency disks. But this is 2006, so I refuse to use a floppy if I don’t have to; it just feels … wrong.

Here’s the good news: you don’t have to. As seen on the Microsoft Software Forum Network, it’s possible to build a custom installer using a utility called nLite that incorporates the drivers. You just grab NVIDIA’s drivers off their site, build a new XP installer from your XP Pro disc, burn it to your own disc, and go. nLite has changed my life for other reasons; see below.

If you’re running Linux, your life is going to be a little more difficult. (Where have I heard that phrase before?) Linux can run software RAIDs, but via its own utility, dmraid. (Some hardcore Linux users are also snobs about this whole thing and call software RAIDs FakeRaids and make mean comments about anyone using them, but you can just ignore them.) The tricky part comes when you need to dual-boot and use your NVIDIA RAID on Linux and XP. I didn’t really have any pressing need to run Linux on this machine for the time being, so I decided to give up for the time being and come back to it later.

Now the fun part: removing all that Windows bloat and making XP run the way we want it to.

Every so often, a utility changes your life, and that’s definitely the way I feel about nLite and Windows. nLite is a free utility aimed at people who have to deploy Windows on multiple machines using a disc, and accordingly it includes features like “Unattended Setup” so you don’t have to sit hovering over the ENTER key just to install. But it’s just as useful for individual users:

nLite allows you to build a custom install CD that works identically to your original XP CD, but includes all the custom drivers you need for your machine, and (just as importantly) doesn’t include anything you don’t want. It also lets you tweak a wide variety of settings before installation, rather than having to go through dozens of settings panels and Registry entries after installation. For me, that turned what would normally take a full afternoon and evening into a few minutes’ work.

Here’s the basic process. Note that you’ll need a Windows PC to create the install disc, though if you’re doing this for your first Windows PC (or Intel Mac), I’d say it’s worth it to beg time on a friend’s machine; it saves that much time.

Download Drivers: Part of the appeal of building the custom Shuttle PC for me was that it uses only the drivers you actually need, not a bunch of random third-party crap you don’t (I’m looking at you, Toshiba laptop). This was a simple matter of heading to the Shuttle site and downloading mainboard, Envy audio, NVRAID, and NVIDIA graphics drivers.

Point to your existing XP installation image: You’ll need a real Windows XP install disc to begin with. I purchased the full OEM version of Windows XP Professional from Newegg, so I burned the image from that using Alex Feinman’s wonderful freeware ISO utility, ISO Recorder. Then, locate that installation in nLite, and you’re ready to begin setting up the installation. At this point, you’d normally integrate hotfixes and service packs, too, but I’m lazy so I did that with Windows Update afterwards (even though it’s a little riskier).

Integrate drivers: If for no other reason, you should use nLite for this feature. Integrating drivers lets you build drivers for all the necessary hardware right into your install CD, since most of them are not included by default in Windows XP when you’re building your own system disc. Extract the drivers if they’re in an archive, then point nLite to the .inf file. (nLite also lets you include all drivers in a single folder, so for drivers like the mainboard driver pack which includes various components, this is the simplest approach.) In the case of the NVRAID drivers, this also meant I never had to touch a floppy: I just downloaded the NVRAID drivers via a link from Shuttle, pointed nLite at its .inf file, and was done. I can keep the floppies around and use a USB floppy drive to boot in an emergency, but it was nice to save this extra step. (Note that the aforementioned thread mentioned some complexities with certain NVRAID driver versions, but for me the whole process was plug and play — no issues whatsoever.)

Remove components: nLite includes detailed descriptions of each component of XP, with advice on components you might actually want to keep. Coupled with some basic knowledge of what you’re doing, you should be able to safely remove big chunks of XP you’ll never use before installation rather than after, making the whole process dramatically faster. You also get to remove silly wallpapers and games you won’t play, clearing your hard drive and Start menu. (Sorry, Solitaire, though I did enjoy the hours I spent with you back in Windows 3.0.)

Options, Patches, and Tweaks: This is my favorite part. Normally, I book several hours to navigate Control Panels and Registry entries and still I find annoying parts of XP I can’t get rid of. nLite’s pages of options let you clear instantly through the vast majority of the time-consuming animations, visual effects, beeps, cartoon dogs in search, unusable Explorer file views, bizarre defaults, ugly blue Fisher Price themes, and other quirks that make XP get on your nerves before you ever get a chance to see them. There are even nice extras like the ability to turn on MS Visual Style theme support without any additional software. You can see a few examples above. Trust me, whether you’re a Registry power user or have never bothered adjusting anything in XP, it’s worth navigating these options, particularly as we’re building a performance rig here.

Build & Burn: Once that’s done, you make a bootable CD image, burn it to disc, and install. (ISO Recorder to the rescue again!) I honestly expected to find some quirk or incompatibility, but everything went completely smoothly. The Shuttle also intelligently defaults to booting from disc in BIOS; don’t ask why, but some PCs don’t have this turned on by default.

What have we learned?

nLite is awesome: I went from installation to boot with a system that was almost perfectly configured, right out of the box. I could have even added additional third-party drivers and software, but for me this was the perfect XP install disc. It’s also absolutely ideal for a performance rig, because I now have a custom XP installer that gets me up and running quickly should my system get hosed on the road. Add a USB floppy drive and rescue discs for safety, plus an up-to-date installer of software I use on the road like Max/MSP/Jitter and Ableton Live, and I’m good to go.

Building a custom PC isn’t just about the hardware: it ensures you don’t wind up with weird, unreliable system drivers and botched Windows install discs filled with trial software and broken third-party control panels. That’s why it makes so much sense to take the time to build your own computer the way you want: it gives you a finely-tuned software/OS rig as well as hardware.

Linux can still be quirky: Windows and Mac have plenty of complications of their own, but it is frustrating when Linux is tricky to install. To be truly successful on the desktop, Linux needs to be easier, and ignoring users of a common hardware type (software RAIDs) is not a good approach. I only bring this up because I fully expect we’ll see this fixed in the next year, and I’m absolutely certain distributions like SUSE, Mandriva, and Ubuntu could manage it. There are an increasing number of users with these machines and wanting to dual-boot, so that should keep the pressure on. In this case, I wanted to keep the rig to the setup I needed, anyway, and Linux just isn’t in the cards — for now. That could change in a few months, so stay tuned.

Windows doesn’t have to be painful: Tweak that installer, turn off all the useless crap Microsoft stupidly thought would make things easier, and XP can be a great OS for getting work done and performing. There’s another message to Microsoft, though: stop bloating your OS. How exactly does that make our lives easier? It’s a good thing Vista will be lean and — oh, never mind. I hope we get an nLite-like tool for Vista, too.

For our next installment, I’ll give final impressions on the Shuttle hardware and luggage, pack this gear into their carry cases, and show you what the Shuttle rig we built is like on a gig.

Tune in next week, when we’ll hear Peter say: “You know, I could just take a cab instead of lugging this on the subway.”

An Audio Interface for the Studio and the Road: Mackie’s Satellite