TyphoonLabs Shader Designer is a free IDE for creating your own vertex and pixel/fragment shaders, the magical code snippets that process 3D geometries, textures, and even images and video on your GPU. I’ve been fiddling around with it a bit on Windows as I work on learning OpenGL’s shading language, GLSL, and it seems quite handy. Previously Windows-only, it’s now available on Linux, as well. (It was developed with .NET, which is getting increasingly nice OpenGL tools of its own.) 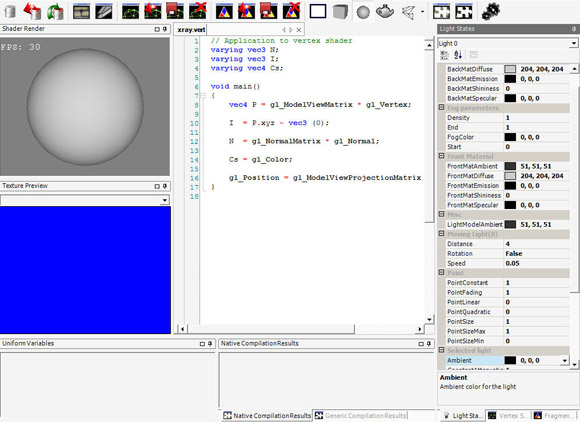 With code completion and syntax highlighting, easy access to settings, and real-time previews, this could be just the tool for someone learning about shaders for use in other software, like Max/MSP/Jitter.

If you’re on the Mac and want something similar, make sure you’ve installed the developer tools from the OS X 10.4 disc, and check out the 3D folders. There’s a similar tool for working with shaders included in the OS X distribution.

We hope to have more shader coverage through 2006, so hold onto your seats for some newbie-friendly shader tutorials. (I.e., if we can do it, you can do it.)

Via OpenGL.org’s news blog, an excellent source for all the latest OpenGL geekery.