Jeff Carlson reviews Final Cut Express HD 3.5 for Macworld.com. (Note that our full reviews at Macworld are now largely online-only and free.) This is a significant release in that it delivers a number of features from Final Cut Pro and is Universal for Intel Macs, bringing both the Express and Pro suites from Apple full Intel Mac compatibility. (Now, if we just had some Intel-based desktop machines…) 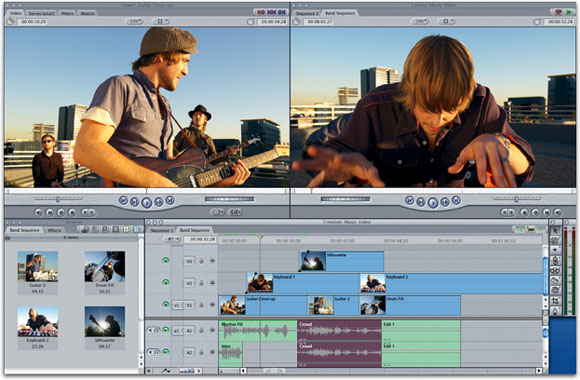 If you can’t afford to spring for the full Final Cut Pro or Final Cut Studio, the Express HD version is looking better all the time. It now supports dynamic real-time previews so you’ll spend less time rendering, especially if you have a fast machine, and the previously pro-only keyframe features. My bet is that Express should be perfect for live visualists, VJs, and artists on many counts; the big reason to switch to Studio would be to take advantage of the full Apple bundle with DVD Studio Pro, Motion, and Soundtrack Pro.

The other nice surprise in the new Express release is that Apple has built a new Soundtrack on the codebase of Soundtrack Pro. Soundtrack 1.5 looks like basically the same application as Soundtrack Pro, with Apple Loops support, multitrack editing, scoring markers, and lots of effects. I’m guessing some of the advanced editing features and Logic Pro effects in Soundtrack Pro are missing, but I have to confirm that with Apple.

I’m not giving up my Final Cut Studio any time soon, particularly since I’m a big fan of DVD Studio Pro and Motion, but this looks like a great budget option. More on Soundtrack 1.5 once I can confirm that feature set with Apple. In the meantime, you can hear me and other readers lament about the loss of Soundtrack Pro as a standalone project on Create Digital Music.