I’ve been doing some more work on my Processing-Plotter setup. The current plan is to amass a collection of Processing sketches which perform various plotter functions – initialization, scaling, shade modes, layers, shapes, communication etc. – and then put them together as a Processing library.

This is fun for me, but like the initial circle drawing test it’s not very interesting visually, so I decided to remix Mr Nibbles as a plot. 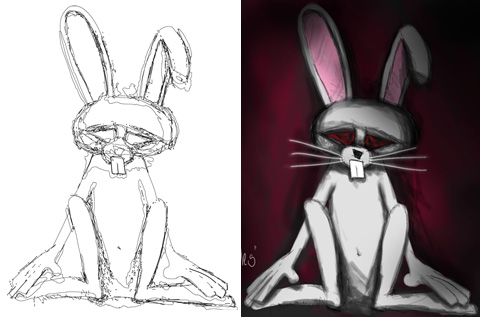 It’s still great fun to watch, and the result is a pleasant mix of organic and mechanic, planned and random. I ran a second test (which didn’t work either, but in the middle of the paper), and took a few quick shots of the results. 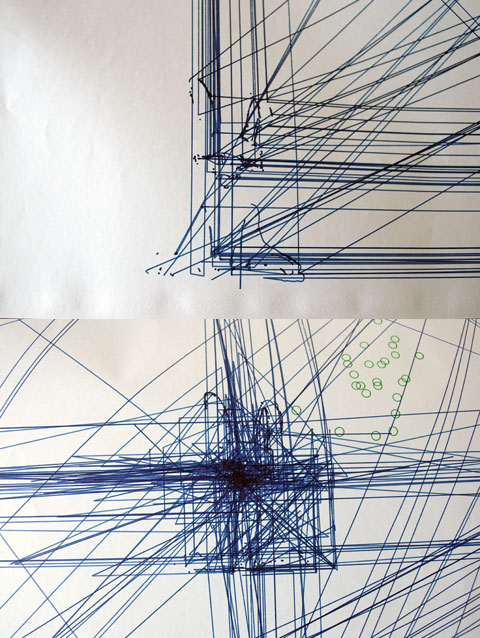 I have video of the second plot which I’ll post later if anyone is interested. Also, this post is using the After Effects to Flash export procedure mentioned in my previous post. It’s simple, relatively quick, looks much better than Youtube and is hosted on our own server. Filesize (12MB) could do with a little tweaking, but the only thing I’m really not loving is the video control component, which is a little bland and clumsy. Does anyone have a source for custom flash video control overlays?

Update: This was originally posted on Monday, but we had some problems getting WordPress to publish the flash object with the player overlay. Eventually we’ve settled on using the Kimili Flash Embed plugin with the “base” attribute pointing to the folder containing the FLVPlayback component skin.

processing.org
Livecoding glitch, eye-searing colors, AI poetry, and the knowledge to make it yourself for free
vectors
Vector dreams, in a new book on sound-modulated light
after-effects
Premiere: rituals of sound and rhythm in the latest from Mexico’s FAX
vectors
Live compositions on oscilloscope: nuuun, ATOM TM