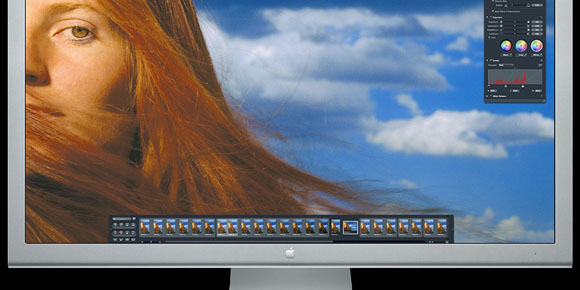 Apple has finally delivered on the Intel Mac towers for which we’ve been waiting. The new machines give you basically everything you wanted: the slick, cheese-grater chic of the old Aluminum G5 towers, plus the expansion options missing on those machines, all with Windows dual-boot capability and top-of-class Xeon Woodcrest architecture. US$2500 isn’t pocket change for everyone, but these machines are very price-competitive with Woodcrest PCs; as with Apple’s Intel laptops, a customizable single configuration lets Apple ship in greater volume than some of its larger PC competitors by focusing on one model.

But let’s talk specifically about what these machines mean for creative visual work. The new Mac Pros offer two significant benefits, beyond the additional expandability and Windows booting: they’ve got even more computational muscle than the mighty Quad G5 towers, courtesy Intel, and they feature beefed-up video card options for playing Unreal 2007— I mean, um, serious graphics work. Add to that new, cheaper, brighter Cinema Displays, and I expect even some PC lovers may go Mac.

(PS, anyone else note the irony of the image above, Apple’s promotional image taken from Apple Aperture, resembling Adobe box art? Is Apple trying to send a subliminal message about Intel-native compatibility of Creative Suite, or is it just me?)

The new architecture offers healthy performance boosts over the Quad G5. That’s no mean feat, as the Quads were already blazingly fast, as verified not only in Mac-centric benchmarks but Mac vs. PC shootouts. The Xeon Woodcrest architecture, though, finally takes the PowerPC down, with 1.3-1.4x gains in rendering and encoding in Final Cut Pro (at both DV and HDV resolutions). Here’s a sample:

Interestingly, this isn’t as huge as the significant boosts cited in Logic Pro, stacking PlatinumVerb reverbs and Sculpture instruments, but to me the Final Cut tests are closer to real-world tests. I know I’ve been stuck rendering in Final Cut Pro, watching the minutes tick down to a deadline (or a live visual gig).

Even bigger boosts come, interestingly, in 3D software: 3D app Modo runs 1.6-1.8x times faster at rendering. Ultimately, I’m not sure these will justify dumping a Quad if you just bought one, but if you have an older G5 or G4, this will clearly be a fantastic machine. It’ll be interesting to see if other real world tests show similar gains; I’ll be very impressed if so. (I leave that to my colleagues at Macworld.) 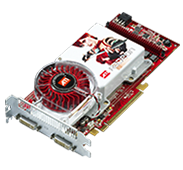 What also catches my eye is that Apple has finally offered a better lineup of graphics cards. The baseline is the excellent NVIDIA 7300 GT. NVIDIA’s 7 Series performs really well; I’m writing this on a PC running the 7600 GT. For the average user, this is likely to be all you’ll ever need for running 2D graphics apps and more advanced real-time 3D rendering in desktop 3D apps, and real-time 3D software like Jitter. I’m a little disappointed that Apple chose the 7300 over the 7600; the latter supports greater memory bandwidth and computational power. But this is a nice, quiet, cool card, and one that will fit the needs of most users — even if you want to fire up a 3D game on the weekend.

The big jump here, though, is replacing the 7800 GT with the even better 512MB ATI X1900. You can get this hard-core video card for just US$350 (well below list if you were buying a la carte). To me, this is the simplest option if performance is your main goal; Apple ain’t kidding when they promise 106 fps in Doom 3.

Even better, Apple has some great deals to pre-configure these via SLI and Dual-Link for high-end 3D performance, with up to four 7300s. In fact, I wonder if the reason Apple went with the comparatively lower-end 7300 is the ease of filling PCIe slots with more for enhanced performance.

As with the Power Mac G5, you’ll also have the option of the wildly-expensive but powerful workstation-class NVIDIA Quadro. For comparison on options, see the old Power Mac G5 graphics lineup:

All in all, you’ve got some serious options if you’re doing this stuff for a living, or, erm, if not, if you happen to be really good at writing grant applications for running giant, multi-display 3D graphics installations!

In fact, the only real drawback with Apple, as usual, is that the limited options might actually be overkill. I love the new Mac Pros, but I want a machine I can haul to live visual gigs, and this hulking tower is definitely not that machine. PCs still provide interesting options for portable minitowers and more custom configuration than Apple gives you. But as a studio machine, the Mac Pro will truly be hard to beat.

Display on the Side?

Lastly, many have noted that Apple’s displays, while lovely, are a bit more about the logo than the product, especially since cheaper, competing (cough, Dell!) feature the same innards. Gizmodo has a nice piece about Apple’s latest update that suggests a price drop, plus significantly brighter display, could make the Cinema Display competitive again even if you don’t want something pretty and silver. Then again, my Cinema Display is almost blindingly bright. Maybe they’ve gone too far. Oh, come on, who am I kidding?

The real news here may be that the Mac Pro will speed Mac developers on getting Intel-native software. Yes, Adobe, we mean you.

CDMotion’s Jaymis has a briefer take on all the WWDC announcements: “The only thing I’m qualified to say is: macs are looking even more attractive now.”

So, what are your plans? PC or Mac? Tower or laptop? Did the Mac Pro announcements impact your purchasing plans, or are they exactly what you expected? We’d love to hear from you in comments.

Data Mining for Fun and Projection

Mac
Samplr’s creator made a free sample player for the MacBook Touch Bar
Mac
Here’s how to master rhythms and polyrhythms with free modules in VCV Rack
AppleMac
The Mac will now have the same chip architecture as an iPad, so what does that mean for us?
wwdc
djay Pro adds real-time AI separation on Apple’s Bionic chip – and producers will want it too
We use cookies and other tracking technologies to improve your browsing experience on our site, show personalized content and targeted ads, analyze site traffic, and understand where our audience is coming from. By choosing I Accept, you consent to our use of cookies and other tracking technologies. Please read our Privacy Policy.