Super 8 Film In The 21st Century

I admit to being an incurable retro junkie. With that in mind, it’s worth making Super 8 part of your digital image arsenal. Even though few Super 8 cameras have been manufactured since the early 1980s, Kodak still offers a solid lineup of color and black & white film for as little as $14 per 50 foot cartridge (which lasts 2 minutes and 30 seconds). Once you start shooting motion picture film, there’s no turning back — there’s something addictive about the sight of genuine film grain and the way film responds to light. 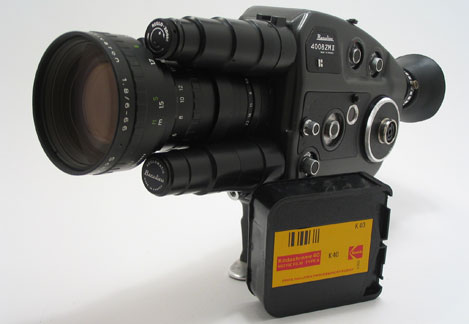 Cameras are inexpensive and plentiful on eBay. You should expect to pay under $100 for a well-equipped device that can shoot at a “professional” speed of 24 frames per second and offers useful options such as slow-motion and timelapse. In fact, the ability to shoot film at a variety of speeds is one of its strongest benefits.

Once you’ve captured images on film, there’s no need to haul out a clunky old projector. Many companies offer pro-quality film to video transfers, starting at around $20 per reel. You can even purchase excellent video transfer equipment for under $1400. Once your film has been copied to miniDV tape you can manipulate it using all of your favorite video editing software.

Filmshooting.com: the most active online Super 8 film forum
Kodak’s Super 8 film lineup
OnSuper8.org: one of the most up-to-date Super 8 resources on the web

cameras
Azure Kinect promises new motion, sensing for art
cheap
Brunswick is a grimy patchable synth kit with BEEF, for under £99
cheap
Fake a $30k pro video controller with an APC40 or Beatstep and Davinci Resolve
movies
Mo’Wax, James Lavelle, DJ Shadow, and more in a new documentary
We use cookies and other tracking technologies to improve your browsing experience on our site, show personalized content and targeted ads, analyze site traffic, and understand where our audience is coming from. By choosing I Accept, you consent to our use of cookies and other tracking technologies. Please read our Privacy Policy.