As I have a plotter which only speaks vectors, and Peter has motion tracking on the brain we’ve been thinking about visualisations involving vector graphics a lot recently. Someone else who has visualisation on the brain is Martin Wattenberg. I’ve encountered his work before, but hadn’t connected the projects together.

Shape of Mary Had A Little Lamb

Most recently The Shape of Song (from 2001) turned up Music Thing.

Using midi as a source removes all of the ambiguity and noise inherent in audio analysis. This is most evident in media player visualisations – a waveform contains too much data moving too quickly to reproduce meaningfully on screen, so they never really seem to produce images which can be seen to correlate to the track playing. However, the Shape of Song Software uses the simplified data available in midi files to produce clean, clear visualisations. As seen below in my aggregation of the midi track from Aphex Twin’s “Beetles”. 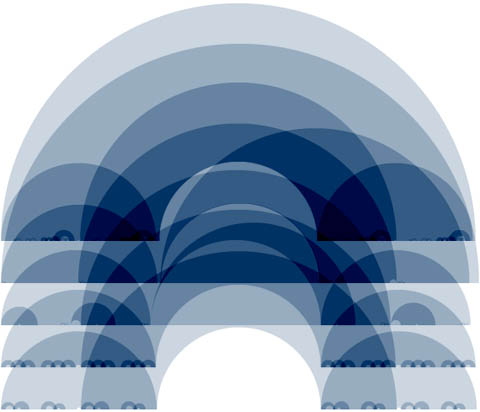 These images display a piece of music over its entire length, so they’re not really useful for visual performance. They do illustrate how useful midi data from the music can be for a VJ though. The gig in which I drowned my laptop with beer was supposed to include a debut of some DJ Shadow style a/v drumming as documented by Dave Dri. Even in the comfort of my own home this was incredibly fun, and it looked fantastic. Visualists, find yourself a Digital Musician and get your midi on.

If you don’t have any collaborators nearby, processing has proMIDI, and I’m sure Peter or other learned commentors will point us to some worthwhile Audio to Midi apps soon.