The Best of 2006 for Visualists

Forget predictions. It’s hard enough just processing (or is that Processing) the powerful, new visual tools digital artists got in 2006. With that in mind, we, the Create Digital Motion co-editors Peter Kirn and Jaymis Loveday, take a fond look at our favorite tools and art for 2006. And you can bet that this list is as much a look forward at what we’ll be using in 2007 as it is a look backward. (Peter: Also, everything Jaymis says, I second. We really need to find something to disagree on. We’d make a terrible movie review duo.)

Check out our list, and submit your own nominations in comments. Predictions for 2007? I predict CDMo will drool over lots of new gear and DIY Arduino projects, get completely lost in Adobe software, waste a whole bunch of time on RSS and watching YouTube eye candy, and find new and innovative ways of slipping off to the bar for a drink while still controlling our live visual sets. (Wii remote, I’m looking at you!)

Most significant technology of 2006 Jaymis:
Adobe Creative Suite 2: Adobe’s tight integration of After Effects, Premiere, Illustrator, Photoshop, and Flash is the killer app for visualists. This isn’t a new technology, but to me it’s the most exciting development of 2006. While HD format wars, increasing DRM and film studio funded political meddling are all making things more difficult, Adobe’s buyout of Macromedia and tighter integration of their existing products can only spell great things for 2007. [CDM Adobe tag] Funny. That’s exactly the face I make when I’m looking over my Processing code. From a Processing-powered Nike campaign.

Peter:
Code: No, I’m not crazy. Code is back for artists, and rather than choose any one technology, I think it’s easier to look at the collection of technologies that are bringing it back. Processing deserves special recognition, because it really has done a superb job of teaching non-programming artists the beauties of code, and it’s also something we’ll see a lot more of in 2007. But Flash and Flex are the surprise counterpart, and have an even more robust open source community behind them than Processing, despite being based on commercial projects. With the advent of ActionScript 3, these platforms have finally evolved into serious programming tools, and that means more muscle for processing images, animation, and video. Core Image from Apple’s Quartz makes it easier than ever to code custom 3D shaders for processing video and imagery on your graphics card, by taking care of a lot of the nasty guts for you (and CI integrates perfectly not only with Apple’s hard-core developer tools, but also Jitter and Quartz Composer). In 2007, I think we’ll see Microsoft feature prominently in this category, with their new 3D DirectX 10 API in Vista and their friendly game development environment XNA.

Jaymis:
HD Camcorders: While I haven’t upgraded to HD, the plethora of high resolution cameras released this year is bringing down prices. Tech such as the Sony HRD-SR1’s Slow Motion and the upcoming RED digital cinema camera have me extremely excited to see what 2007 will bring.

Peter:
Cheap Hardware: Yeah, I’m going to cop out on this category, too. It’s not so much new hardware that made 2006 a huge year for visualists: it’s that the old hardware finally got accessible. Laptops with decent graphics cards and Core Duo CPUs capable of processing higher-quality video made mobile laptop VJing more practical than ever, and crappy 320×240 resolution a thing of the past. Sure, you could go buy $20,000 worth of hardware to mix DV video — or you could use an $800 MacBook. For 3D, small form factor PCs like the Shuttle XPC I assembled (see CDM’s Shuttle tag) support high-end dual graphics cards and even SLI (though you’ll probably want to ignore SLI so you can run four video outputs at once instead). Superb DLP projectors hit the $500-600 range, meaning even VJs on a budget can bring their own projection rig. And good DV cams broke the $400 barrier. HD is terrific, but DV for $350 is pretty nice, too. 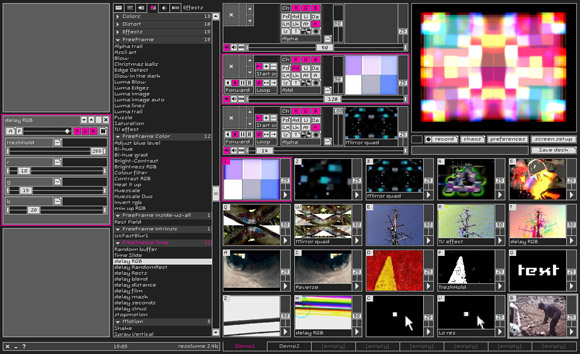 Jaymis:
Resolume 2.4: As a long-time fan I’m extremely biased, but Bart and Edwin have matured Resolume into a great performance tool for visualists, and while other developers force users to pay for bugfix “upgrades”, Resolume’s “point” upgrades are free, and 2.4 brought a BPM clock (for Clips and Effects) and DMX control, among a myriad smaller fixes and enhancements. Like Adobe with CS2, Resolume are listening to their user base and continuing to do what they do well. Architecture tool? Absolutely. But SketchUp is just as much fun pumping out unique 3D visuals for clubs.

Peter:
SketchUp: SketchUp is the sign of things to come, when 3D is as fluid and commonplace as 2D imagery is today. (And I don’t think one will replace the other, either; I think we’ll see renewed interest in what 2D is once people understand just how different 3D can be.) SketchUp may make you a little dizzy as you try to adapt to three-dimensional space, but it does demonstrate that it is possible to sketch in 3D space. And it runs quite nicely even on relatively modest machines. (Well, unless you crank the render quality and output an eight minute video flyby through a ridiculously complex scene, like I kept doing. It’s worth the wait.) There’s a free version from Google, but be ready to shell out for the full version with OBJ export to live visual software and video rendering capability.

Jaymis:
The HD-DVD/Blue Ray format war: Movie studios seem to have the memory of goldfishes. I remember going to video stores in the 80s and being unable to rent certain titles because my household had a VHS, not Beta VCR. Let’s hope consumers remember a little further back and are able to decide quickly on a format to get behind, so the other dies quickly and without wasting too much of consumers’ money. My personal take: Sony have a history of creating proprietary formats which die out, and they have no respect for their customers.

Peter:
HD Copy Protection: Rootkit? That was nothing. Get ready for HD, which has endless draconian measures for disabling high-quality digital video and audio output, restrictions on what hardware can be used for playback, etc., etc. What disappoints me is that many consumers probably won’t understand why their HD setup looks like shite, because they won’t get that they needed xx component and xx cable to support the industry’s absurdly complex copy protection schemes. This should have been the age of HD; format infighting and copy protection backwardness is likely to delay the revolution by years.

Jaymis:
Arduino: Microcontrollers for the people!

Peter:
Flashdevelop: free, open-source, ActionScript 2 and 3 development. I love Arduino, too, so I’ll be working on a way of fusing the two! Between Flashdevelop for 2D and Processing for 3D, it’s a great time for building open source code projects for visuals.

Album you listened to most (as many nominations as you like here!)

Jaymis:
Boards of Canada – The Campfire Headphase: The best album for working released this year. BoC have long been a favourite of designers, and Headphase brings electric guitars into the mix, while continuing with that downbeat sound we all love.

Hybrid – I Choose Noise: The only album in my list actually released in 2006 (the others were all late 2005). Hybrid’s latest offering didn’t grab me as quickly as their previous albums, but revealed its true nature over time.

Peter:
I’ll sit this one out and put it in my CDMusic list. But I can’t begin to describe how important it is to play good music while you’re coding, Jitter patching, SketchUp drawing, video editing … thank you, Windows Media Player, Winamp, Songbird (my Windows machine is currently the main visual machine).

Artist who inspired you most

Jaymis:
Uruk Videomachine‘s Project Geante installation was the freshest, most impressive piece of photon artistry of 2006. Peter:
Because I got to work with him personally at the Anderson Arts Ranch in Aspen, I was most inspired by Flash guru and interactive designer Nikolai Cornell. His interactive mirrors are fantastic, and it’s great to just get the chance to work on making stuff. We do a lot of thinking and reading about interactive design and visuals, but sometimes it’s best to just get your hands dirty with some other people around.

Jaymis:
Youtube: I’m not having any of the “Youtube = best invention of 2006” bollocks. It’s not a particularly good technological solution for video sharing, or a great community, but the ease of uploading and sharing through embed links meant that youtube quickly reached a critial mass of users who have uploaded the best colection of timewasting videos anywhere on the web.

Peter:
RSS: Between Make Magazine, Processingblogs, and many others, there’s constant stimulation — and distraction. At a certain point, you have to turn it off so you can focus on what you’re doing and not what the rest of the planet is doing. But, oh, do we ever live in a wondrous age of DIY visual creation! 2007 is downright terrifying. And we’re glad to be part of that distraction.

Platform of the Year Peter:
I’ve decided to throw in one last category, because I noticed a trend as I was thinking through the tools I use. For live visuals, despite the cool capabilities of Quartz and Quartz Composer on Mac, I have to say Windows has become my visual platform of choice. There are many reasons, but if you need just one, it’s Adobe. Creative Suite is more complete on Windows, with full integration for Audition (arguably the best audio editor on any platform) and Premiere (arguably the most underrated video editor on any platform), and I find the full-screen interfaces much easier to use than the palette sprawl on Mac. Flash simply runs faster on Windows, though I do hope Adobe is able to close that gap. ActionScript 3 development, meanwhile, is far easier on Windows thanks to Flashdevelop (though of course Flex did finally make it to Mac). Windows Adobe users were already getting great AMD and Intel performance, and were thus spared the agony of the Intel switch on Mac.

Adobe isn’t the only reason, however. There’s the excellent VJ app Resolume, the ability to build your own portable PC and swap video cards, excellent support from the once Mac-centric app Max/MSP/Jitter, far better Java performance for cool stuff like Processing than found on any other platform, and the free DirectX-based vvvv.

I think 2007 could be an even better year, as Vista (and presumably Vista SP1) iron out some XP deficiencies and give it a boost with new 3D capabilities.

Don’t get cocky, though, Windows. The Mac is by far the easier, more stable platform to use. Only on Windows was a webcam driver (thank you, Logitech) able to completely disable my machine (more on that soon). And the Mac absolutely pummels Windows when it comes to installing audio and MIDI drivers, because of inexplicably awful driver support in Windows XP. I’m not convinced the first release of Vista will solve these problems, either.

And make no mistake: Create Digital Music and Create Digital Motion aren’t taking any sides in the OS wars. In fact, I’m excited that 2007 may be the first year I start assembling visual gigs on Linux. Stay tuned.

CinemaTech: Ten Pivotal Events of 2006, from the Intersection of Entertainment and Technology covers everything from Diet Coke + Mentos to the spread of digital projection systems. And they did theirs while it was still 2006, no less.

What are your favorite picks for 2006? Best technology? Best project? Best software/hardware? Best art? Music for working to? Let us know. And if you have a round-up on your own blog, please send it here.

What are Your 2007 Musical Resolutions?