Any Visualists Using Motion 3 Yet? 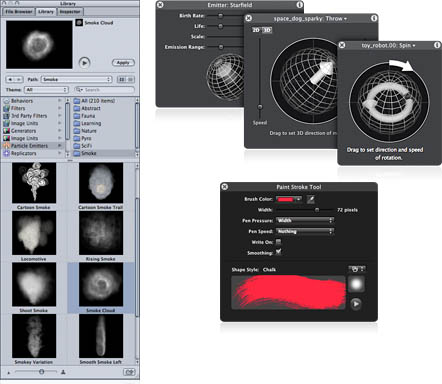 Not your father’s Motion: Have you been working out? Apple’s Motion has been bulking up with powerful new vector paint, match move, and 3D capabilities. In a world crowded with powerful visual-making tools, it’s starting to at last differentiate a unique, Motion-y way of working — one that should be easily combined with other tools for those of us who can just never get enough eye candy.

This weekend I’m diving deeper into Apple Motion 3 in Final Cut Studio 2. So far, lots of great new possibilities with match move, genuine 3D (i.e., with a Z-axis you can actually do something with), and vector paint — and, of course, I’m looking for ways to abuse all of it. Expect some “How Not to Use Motion” tips and techniques soon. Because, really, you don’t want to look like the presets.

Theoretically, there are people using Motion for live visuals, but I’ve yet to meet someone who’s actually doing it as opposed to just talking about it or demoing it lecture-style. I should have a MacBook Pro very soon for testing. That would allow running Motion stuff on one machine while keeping another piece of gear handy for more traditional video (while you load new Motion projects, for instance). With the new 3D stuff, I could see creating some dynamic, live stuff. Easy? Necessary? Probably not. Worth doing because it’s there? Heck, yeah.

Motion does look promising, as well, for generating footage. I love programming generative visuals in Jitter or Processing, but you do occasionally want to produce visuals in less time-consuming ways. As opposed to previous versions, this is a release where you won’t immediately say, “I can do that in Quartz Composer!”

Anyone else out there working with Motion yet want to share impressions? (Even using it … properly?)