Hands On: Major Updates and Fixes in Apple Motion 3.0.1 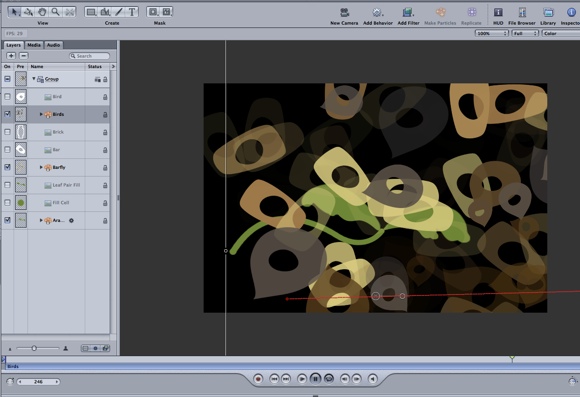 With all the attention on the other parts of Final Cut Studio 2’s fixes, released in an update yesterday, it’s worth noting some major tweaks to Motion. If you’ve been playing with Motion and found some — erm, kinks, as you tend to get in point-oh releases — this is great news. Motion 3 was a huge release, with lots of motion analysis tools and new 3D generators, cameras, and vector paint, so accordingly some of the biggest fixes in the Final Cut Studio update impact Motion.

Normalized flipping – new feature: When working with text on a path, the new Flip Normal shortcut menu option makes it easier to flip based on segments of a curve — i.e., one control point at a time. (Don’t worry, if you have to ask, it’s probably not an issue.)

Tracker size – new feature: I was already pleased with Motion’s tracking options, but the new Tracker Size lets you customize the size of the region you’re manipulating for better results. This is a bit like changing the range of what you’re tracking: you can configure it to track small details or bigger moving features.

Performance workaround for trackers: Motion does work in real-time, but complexity can slow it down — that’s just fundamental to some of what it’s doing, and the fact that it’s an open-ended tool. But this update does address some of the bottlenecks. “Soloing” a tracked object, for instance, can keep cameras in a scene from bogging down the system. That’s a step, but I’d love to see controls over entire compositions as far as what renders and how, so you can manage system performance, which is still an issue even on fast machines.

Optical flow disk management: Optical flow analysis (for smoothing between frames, retiming, and so on) requires rendering hard disk files; now you can manage those files.

Better thin shape performance: I’m still testing this to see how much of a difference this made, but this is promising, as I found shapes a bit slow.

If anyone has experience testing the update they want to share, please do. Motion gets a lot less attention than its big brother Final Cut Pro, understandably, but it’s a fascinating tool for visualists.