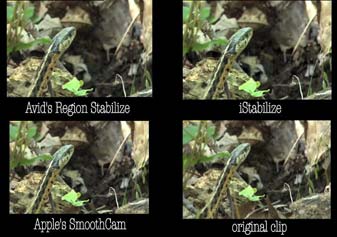 Editblog has responded to Anton’s SmoothCam tests with some tests of their own:

Scott’s tests run even slower than Anton’s, regardless of codec. I asked Anton about this, and his take was that the technology was really intended for short takes, not long chunks of footage, and that you’ll want to make big use of subclips. (Hope I’m getting that right, Anton, but I’ll say I certainly agree with that statement.)

Nonetheless, Scott did an even more interesting comparison with other systems. I think it’s always worth having at least a couple of tools in your arsenal for different tasks, so this is all the more helpful:

We’re going to keep on testing. It’s also worth noting that SmoothCam isn’t the only technology that seems to benefit from Apple’s Shake team and their intellectual resources in video analysis. There are other match move capabilities built into Final Cut Pro. There are also some really compelling match move-related techniques in Motion, and, in contrast to these render-based algorithms, those operate in real-time. (I haven’t yet been able to find out whether those are also related to the underlying processing algorithms from Shake; if anyone knows, speak up.)

Real-time analysis I think will ultimately be the future, not only for correction tasks but all sorts of creative purposes and motion control.

Got more thoughts, blog entries? Send them our way!