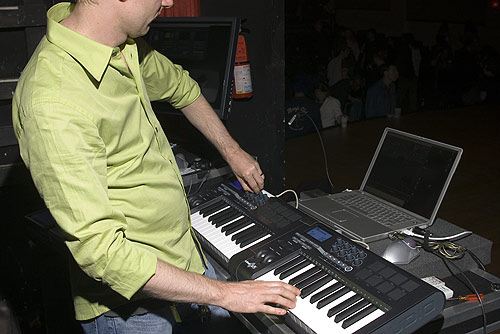 Thomas Dolby’s recent tour was important for more than just the music, though — onboard was legendary visualist/VJ Johnny DeKam, also known as a founder of Mac software maker Vidvox. Here’s what Thomas had to say about Johnny:

To have a VJ up there of Johnny [DeKam]’s stature, mixing live feeds with footage of his own, is definitely exciting. Of course, I’ve never seen the full experience myself, you know. But he does a really good job, and he’s very spontaneous. He’s got a lot of different tricks and toys that he tries out on a nightly basis. Other video guys and VJs who’ve come have sort of been in awe of him because he writes his own software that everybody else would like to get there hands on.

For more on Johnny (and yes, hope to revisit his work and Vidvox soon here on CDM!):

The Day the Music Died, Otherwise Known As The Dawning Era of Negotiations

How To Create a Successful Demo Disc: Tips and Resources, Chicago Event