Wearable Cameras: Visualist Tool, and Could Save You From Plane from Hell 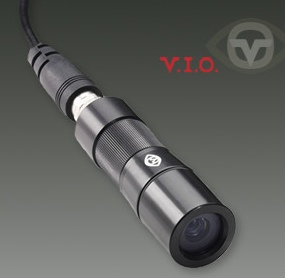 The V.I.O. POV.1, a mobile, wearable “point of view” camera due later this summer, already looks terrific. It’s got a hands-free camera with wireless remote and on-the-spot editing capabilities. I can imagine it being a lot of fun not only for shooting point-of-view footage, but potentially live/club applications, as well. (CDMo will be watching for the specs when it’s released. If you know of similar cameras we should be watching, let us know.)

Demonstrating just how much we live in a new Age of Video, though, the POV.1 is currently more infamous because of an incident on a stranded Delta flight. Delta Connection dispatch evidently kept the flight on the ground so long that passengers were actually becoming ill. (The basic quandary, if you’ve followed the rash of stranded flights lately, is that dispatch doesn’t want to give up a spot in queue for air traffic control, even if it means roasting passengers in the plane.) An employee of V.I.O. took matters into his own hands, and interviewed the flight crew. He was able to be enough of a bother that he got himself ferried off the plane by police, which is apparently the only way to get yourself off such a flight. (Note to self: have ideas for getting arrested handy.) Because he didn’t step into the cockpit, he never violated any rule, and says he gave his interested interrogators a demo of the slick mobile camera.

The video itself turns out not to be all that exciting or well shot, but for what it’s worth, here you go:

This would be a terrific publicity stunt for the camera (hey, I noticed it), if it were not simultaneously such terrible advertising for flying.

In other news: someday, you’ll tell your grandkids about the days before absolutely everything we said and did was documented and uploaded to the Internet.

I want the camera for other reasons. Oh yeah, and I guess I’ll be touring in a bus.

Awesomeness of Daft Punk: A Meta-Roundup