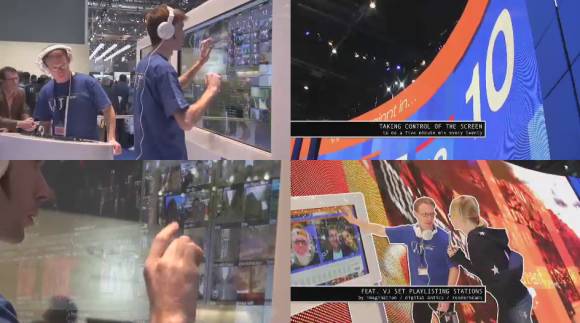 Nice work if you can get it: visualist Toby / tobyz, aka *spark, had one heck of a live visual rig for the Geneva Motor Show’s Ford booth. One ongoing challenge for live VJs is making it clear what they’re doing. Solution: “VJ Crew” t-shirts, lovely women (can’t hurt), and, of course, giant touchscreens for interfacing with the Mac software. Live visuals made the client happy (interactive text!) and made guests happy by snapping photos (happier clients!). The software rig was the glue:

Documentation:
Photos and notes on the install/performance
Video montage of the event

But you don’t have to just silently drool over this setup. Toby is nice enough to give away one of the tools he built to make it happen, open sourced so the community can improve upon it.

the titlerÃ¢â‚¬â„¢s interface allows you to take between two sets of title/subtitle, with the choice of four backgrounds: black / green / a quicktime movie or a folder of images. the output window will automatically go full-screen on the second monitor if it detects one is available at launch, otherwise it will remain a resizable conventional window.

it is released with the intention that it can be reused for other events without changing a single line of code: you can design the animation and incorporate quicktime movies in the design by editing the Ã¢â‚¬ËœGFXÃ¢â‚¬â„¢ macro in the quartz composer patch, and its a matter of drag and drop replace the logo in the interface.

And if you’re up for patching some improvements (with a little light Xcode use), you can dig into the source, as well.

Why Live and Interactive Rules 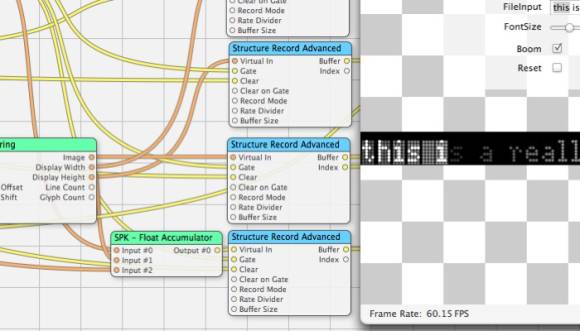 But enough about the technology. Part of the whole philosophy of this site is that we believe “rendered”, wonderful as it can be, sometimes must make room for “live.” Quartz Composer is just one of a generation of tools that allow visualists to move in this direction. It’s part of our interest not just in the “Final Cut” (ahem), but the live cut. Artists are moving in this direction for creative reasons, but it’s equally encouraging to see it working well on gigs. It’s a practical, technical issue as much as it is a philosophical one. Toby explains in a caption to a recent blog entry on his Quartz Composer titling patch (pictured here):

this picture is but a snapshot of the revolution. it really feels like that. a real let-down of the geneva motor show pre-production was the inability to translate the creative agencyÃ¢â‚¬â„¢s after-effects rendered text animations into the live, dynamic setup. there just was no way to implement anything vaguely sophisticated without seeing the framerate drop to near zero. structure record, something driven by video sampling and seemingly tangental [sic] to text rendering, is the key to solving that problem… and so here it is solved, as if on cue for the frankfurt motor show.

Structure Record looks like some kind of custom patch. Not sure how it works — Toby, if you want to enlighten us, please do!

So have a look at that patch, and viva la revoluciÃƒÂ³n!

DIY tripods/mounts and rigs via instructibles