I’ve had 2 rented Draper Cinefold screens with me on the tour. These are relatively expensive collapsible screens which we got a good deal on for a 3ish month rental. Unfortunately their former life at dance parties outside in the elements had left them with some pretty serious battle scars. One of the screen frames had a broken hinge, as did one of the legs. 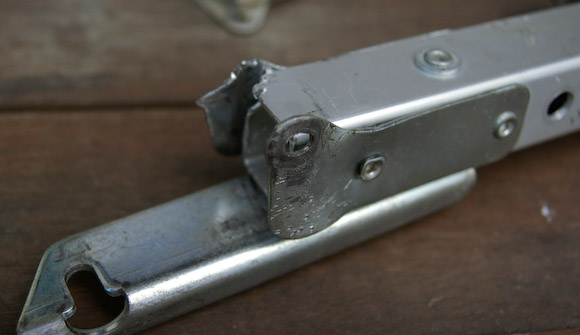 This is why I don’t go Outside. Bad Things happen Outside.

These I “fixed” with gaffer tape and strips of plywood, until we had a couple of days off between tour legs and I time for some maintenance. I realised that while the screens came with drape bars to hang blacks from, they had never been used as the drapes are an extra US$1000ish, and not really required for raves out in the bush.

It was a relatively quick fix to dremel off the rivet heads from the broken and fresh hinges and to bolt the new ones in place. Requires some 6mm bolts, washers, and some nyloc nuts if you want to be extra sure that they’re not going to work their way free as the kit vibrates its way around the country in the back of a truck.

I shot a timelapse of the fix. Not really as a tutorial, as it’s not really something which requires much explanation. More as a celebration of my return to civilization, where I can waste a couple of hours shooting and motion tracking a mundane exercise.