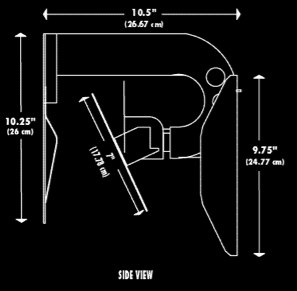 Working on digital visuals for choreographer Grisha Coleman’s echo::system, I got to try some new techniques for running visuals. These were necessary experiments, so naturally we had some things that worked well, and some that didn’t. (For more on the piece, see the project site; warning: auto-playing audio via Flash!)

Two particular pieces of gear involved re-purposing lighting equipment for projection use. At the suggestion of video advisor Maya Ciarrocchi, we used Rosco iCue “intelligent mirrors” for positioning the projections. And because we had easy access to the equipment, we used color scrollers in place of dowsers for darkening projectors.

Now having spent some time with each piece of gear, and having gotten some mixed results, I’m happy to share my experience.

The iCue is a curious piece of hardware that receives DMX data (i.e., control data from a light board), and positions a mirror via a set of stepper motors. Using multiple DMX channels, you can send high-resolution DMX data, allowing for some fairly precise positioning. I say it’s a “curious” device in that it’s almost never actually used by lighting people, from what I could tell. Ot’s sort of a poor man’s movable light, and from a lighting perspective, if you can afford to just get a light that moves, that makes a lot more sense than using a somewhat temperamental moving mirror. 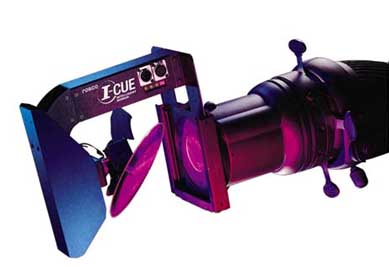 The iCue is used regularly by people doing projection, though, because it allows you to move projection images around freely. And I did find some elements of the design useful. The ability to move around an image opens up some very interesting possibilities, certainly. The round mirror on the iCue creates a naturally circular image that looks very nice. (More on that in a moment.) And the gear isn’t expensive; renting two for over two and a half weeks cost just over US$300. I expect you could find a deal on an unwanted iCue or two and throw it into a road case.

That’s the good news. We did immediately run into some issues with the iCue, however. First, the fact that you have to transmit DMX turns out to be a real pain. As a visualist, you ideally want control over everything you’re doing; you have enough problem working with a lighting designer just to keep your projections visible, without having to worry about using their light board to control gear you need. There are various MIDI-to-DMX converters out there, which could be a reasonable solution, but even then, I’d prefer to use MIDI directly. (If you’ve never used DMX, to a MIDI guru it can actually feel like a step backward — and most of us find MIDI plenty primitive on its own!)

And that’s before we started having DMX troubles. Apparently because of some strange interaction between one of our iCues and our lighting board, the iCue would sometimes behave erratically or stop responding. (We’re fairly certain this wasn’t the result of something as simple as a bad cable, because a second iCue daisy-chained through the first worked just fine.)

The other problem is the mirror itself. They’re extremely fragile; they routinely break in shipment. That’s presumably a problem with any mirror, but worth watching out for. The other issue is the default mirror is built for a light, so it’s round; you might need to build your own mirror for your own use.

Collectively, I have to say the drawbacks for me outweigh the advantages. The simple reality is that moving around a projection image isn’t something you’re all that likely to do in the first place. Moving the image is awkward, and it’s tough to choreograph movements so they look right. (Distortion isn’t such an issue — I quite liked some of the effects of that. But most of the time you might just achieve this with a stationary mirror.) I have to wonder if a better solution, if you really want this, would be to build a MIDI-controlled DIY mirror that you could design to your own specs. Controlling stepper motors isn’t such a big deal.

That said, the solution did essentially work; I’d just want MIDI-to-DMX control to go with it if I used it again, and I would tend to look for simpler solutions. 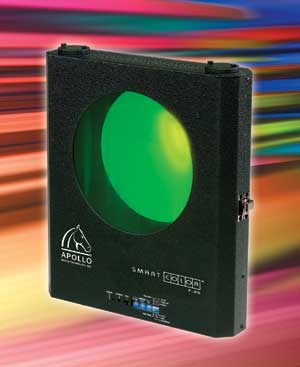 The other piece of lighting gear I got to work with was color scrollers. (Can’t recall the make/model of the ones we had, but they’re fairly standard.) These are rectangular boxes that are fitted in front of lights to change color, as the name implies. Inside is a roll of colored gel with gradated areas of color; the scroller simply scrolls the gel in front of the light to shift its color. Different gel scrolls are available for different effects; in our case, we had stepped color from light to dark.

In a pinch, the color scrollers certainly worked as dowsers: we were able to entirely block the light out of the projector, so we could blacken projectors when we needed. The problem is, there’s no particular advantage to using the color scroller in place of the dowser. The one thing a scroller can do is “fade” from one color to another, but it does so inelegantly enough that you’re unlikely ever to do that anyway. The effect isn’t so much a smooth fade as a series of stepped shades that scroll in front of the projector/light — that is, you get exactly what the scroller is. Working with projections, you’re far more likely to want to fade in and out with your source. Worst of all, the color scrollers are loud: they snap, crackle, and pop as they’re moved. With properly-maintained gels and the right unit, this might not be the case — I see various products employ the brand name “Whisper”, whether they live up to that or not. But they were certainly loud enough to be noticeable in our case, regardless of how carefully we moved them.

And, lastly, you’re back to using DMX yet again, which means navigating the needs of the lighting design on the board. A better solution is to use a dowser with a wired remote, so the projectionist/visualist can dowse manually.

That said, I wouldn’t be all negative on the color scroller. By going directly from light to dark and avoiding the intermediate gradations, we were easily able to make the scrollers into dowsers. And I have to return to the reason we used them in the first place: they were free. That’s a situation I could imagine happening again, because unlike iCues, color scrollers are very common in lighting.

So, there you have it: color scrollers and iCues are fascinating pieces of gear that … I … may never use again. But on the other hand, I can see cases in which I might have use for one, or have access to one and make use of it, and having had these frustrations with them actually would leave me better prepared for dealing with them in the future.

Given my complaints, was it worth it? Absolutely. Thinking out of the box and blending lighting techniques with projection offers the chance to do things differently, and, sometimes, at least, better. While I tended to learn the hard way, I learned a lot. And I see some real potential for new DIY solution, experiments with gels, and experiments with mixing light colored lighting with projection.

But I’m curious, have any of you had experience with these or related pieces of equipment? And anyone got a preferred way of generating DMX signal?

Opinion: Life Beyond the Magazine How-To