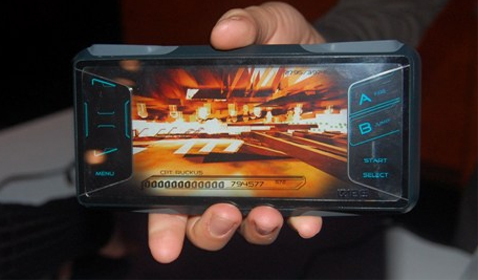 Kotaku points us to a very odd an interesting looking prototype gaming console. The gist of the system is that it captures real-time data from sensors, such as GPS, a camera system, etc., to mold reality into an immersive gaming environment.

Kotaku puts it rather well :

I don’t come from the future, where everyday people carry s*** like this around in their back pocket. Sadly the device is very much in the prototype stage, and may not even be put into production … at least not until the year 2019, when people’s minds will be ready for it.

However, it did get me thinking of interesting uses for it and similar systems that integrate lots of sensor data with desktop processing power. It seems it would suit itself far more to immersive interactive improvisation, which lines up quite well for what many VJs try to do. Either way, I’d rather use something like this in a club or a concert hall than playing a first person shooter running around the streets of New York. Those 2019 cabs still hurt. I’ll admit this is rather far off, and that I am stretching, but I can imagine doing some really fun and creative things with a device like this.

Ed.: Far off? I don’t think so. Strap an Arduino or other sensor-to-digital interface to a Nokia N800, and you’re there! (GPS + camera + sensors.) For visualists, too, we have an added edge: you can take a simpler mobile machine as the interface device, wirelessly connected to a computer as a base station for the heavy lifting. Result: a very affordable device ought to work. -PK

Hardware
Beads is the new sequel to Mutable Instruments’ Clouds, and an instant classic – again
Hardware
Deep testing: new Dreadbox Typhon firmware, new powers for this monosynth
Hardwaremobile
Novation’s Circuit Rhythm is coming in summer; here’s what we know
mobile
What’s in Novation’s new Circuit Tracks: polysynths, drums, sequencing, samples, $399
We use cookies and other tracking technologies to improve your browsing experience on our site, show personalized content and targeted ads, analyze site traffic, and understand where our audience is coming from. By choosing I Accept, you consent to our use of cookies and other tracking technologies. Please read our Privacy Policy.