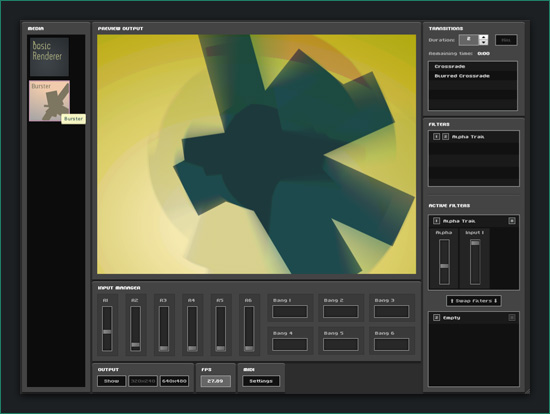 We’ve mentioned VISP earlier in the year, an open source VJ app based on Adobe’s Flex and AIR (formerly Apollo) Rich Internet Application platform. Despite some delays, VISP has been released. Check out VISP-VJ.com for downloads and source code. VISP’s home page contains tutorials, introduction videos and guidelines to download the latest frameworks required by the app. Geared towards generative real-time visuals, VISP looks be be a pretty exciting release, especially considering its open nature.

Some features straight from VISPs homepage:

We’ll be sure to give VISP a good one over and report back as soon as we can!

Ed.: Cool, but I’m still also interested in Onyx VJ. It’s also Flash/Flex-based, so much of what’s here is still true (though I think these are perfectly usable for video triggering). But Onyx has a lot of additional filters and features, including one very nice one: video playback from a VLC server. Of course, nothing stops you from trying both, since they’re both free.

Now, as for generative visuals, seems it’s time for the Processing community to respond. There’s nothing stopping you from doing something similar with Processing and Java, and since they can take advantage of OpenGL/Java3D 3D visuals, among other features, you’ve got more flexibility than with Flash. The main thing is, building a Java app to host other Processing sketches introduces a fair bit of complexity, so developing something would take some work. I’m doing some more limited experiments for my own performance with Processing; if any of it is useful, I’ll be sure to share. -PK