What’s New for Jitter in Max 5

Though most of what’s new in Max 5 is concentrated in Max and MSP, there will be a few treats for Jitter users. First and foremost is the new Matrix Probe: hover your mouse over a green matrix patchcord and you’ll be presented with a floating preview of the matrix passing through it along with information such as dimensions, planecount and other info. This will be a great timesaver — no longer will you have to drop in four jit.pwindows, four jit.fps’s and jit.unpack to find out whether the video you’re sending is the video you think you’re sending. Gregory Taylor tried to demo the Matrix Probe for me at AES last weekend but it wasn’t working in the build he had on his laptop. Nonetheless, I offer this JPEG as proof: 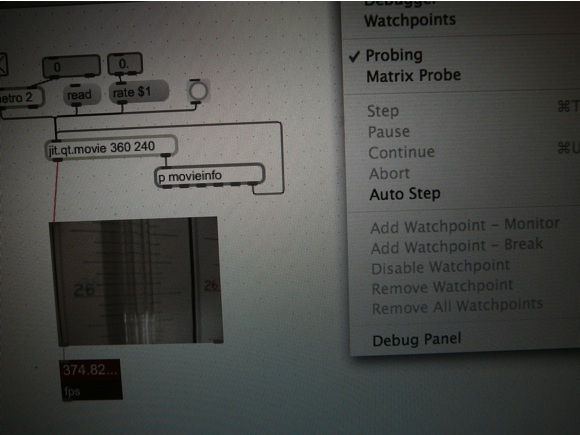 And, unfortunately, that’s about it — too bad Cycling doesn’t have ten more developers working on Jitter full time. Still, the new (dare I say it?) paradigm in Max 5 will bring much to explore even without, um, totally jitter-free playback of HD and SD footage.

Ed.: It’s possible we’ll see some other enhancements between now and Max 5 ship time, but as has happened in the past, Jitter appears to get a different “rotation” in development than Max — so Jitter got a huge 1.5 update while Max/MSP was largely standing still. We’ll certainly keep tabs on development and let you know more details as they arise. There are quite a lot of general improvements that I’m sure Jitter users will love while we wait on these other needed improvements to Jitter itself; see details in discussion in our general Max coverage from Create Digital Music. -PK

Cycling Ã¢â‚¬Ëœ74 Releases Max 5 Details: Bringing Max Out of the 80s, Into the Future
First Max 5 Preview: Music Patching, the Next Generation?