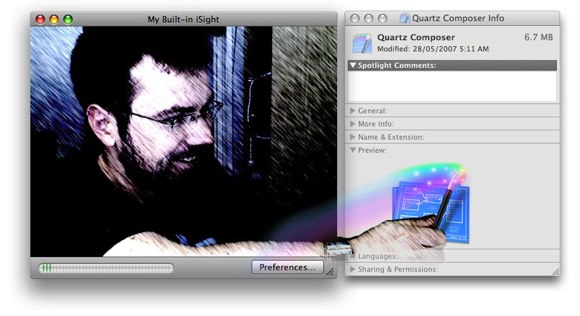 When they say ‘he lives in the computer’..

Quartz Composer, first introduced in OS X 10.4 and rooted in the underground visual app PixelShox, is a hidden gem in Mac OS X. This free visual tool makes some sophisticated video and 3D magic possible without coding. While promising, the version in 10.4 had some significant shortcomings. We turn to Keith Lang of developer plasq, creators of Skitch and ComicLife, to give us an inside look. Keith is not a programmer — so he’s all the more eager to go the visual patching route — but he has had his hands on QC for some time in Leopard dev builds. And now, he’s free to tell us all he knows. -PK

Mac OS X 10.5 “Leopard” is here, and the initial hoopla about the reflective dock has died down. Now that we’ve all passed through the Seven Stages of Acceptance, we have an opportunity to take this brief slither of quiet to delve into the subtler changes within the big new cat. Those changes include improvements made to Quartz Composer, the quaint and oft-misunderstood visual processing environment bundled with the Developer Tools.

What You See: The Interface

For the uninitiated, Quartz Composer is an ‘environment’ tool which lets you patch together various elements in order to build screensavers, performance environments, and animated windows for use within an application. If you’ve ever looked at an Apple screensaver, played with the new iChat Effects or watched photos float and twirl on an Apple TV, then you’re familiar with what Quartz Composer can do. Its peers are tools like Pd (Pure Data), Processing, and Max/MSP/Jitter, with Quartz Composer heavily geared towards motion animation of processed video and images. Input can be everything ranging from your iSight to XML to audio to a Wiimote, with output being a window on 3d space containing all the sprites, effects and movement you care for. Because Quartz Composer is a real-time system, you can plug stuff together whilst watching and tweaking. The underlying engine is very efficient – and with a little work you can create teh cool, without ever needing to type teh code. 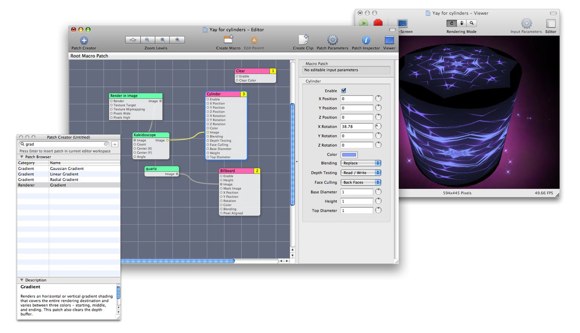 This article assumes you’re familiar with Quartz Composer in Tiger, if not, you can read up on what other people are doing with it. The first thing you’ll notice is the updated user interface. Finding and placing patches is now less work in Leopard. Search for your patch, press Return, and presto! — it appears in your workspace. The patch parameter inspector can now be displayed inside the main windows, but QC persists with its annoying floating inspector and patch creator windows. Along with the Viewer window, these are prone to getting lost under other applications and documents. Ultimately, I’d love Quartz Composer to model the new iMovie layout, with an option to detach the viewer window… but Ways to Improve the QC Interface to Reduce Hair-Loss is entirely another article.

When you launch Quartz Composer, you are presented with an improved template system, which should help both the new and experienced. And of course, the biggest new help to a user is…. Undo. Yes, crazy talk, I know. But you can now Undo when working within Quartz Composer. QC now lets you Zoom in and out freely on the interface as you open multiple Settings windows, keeping your eyes on non-disappearing patch inspector whilst copying variables with wild abandon. And, you can now document your experience with colored notes under your patches to describe what precisely the spaghetti is supposed to do. Speaking of which, patch leads are now easier to manage, with a click-to-start, click-to-end action. Also for your patching convenience: a menu option to select ‘Upstream’ and ‘Downstream’ patches and a Compare Compositions mode.

Some of the smallest fixes will be the most appreciated. The Inspector window used to forget its selected pane, requiring you to continue to select the pane you needed … every … single … time … you … selected … a … new … patch. This is now fixed. Huzzah! You can also now adjust your preview window to a specific ratio, such as 4:3, to make sure your composition will work in its final space.

Changes Under the Hood

Fortunately, Apple uses Quartz Composer for its own projects more and more, which encourages them to make their “dog food” taste better. As a result, almost all the patches have been improved and tweaked in some way to make doing the most common things easier. 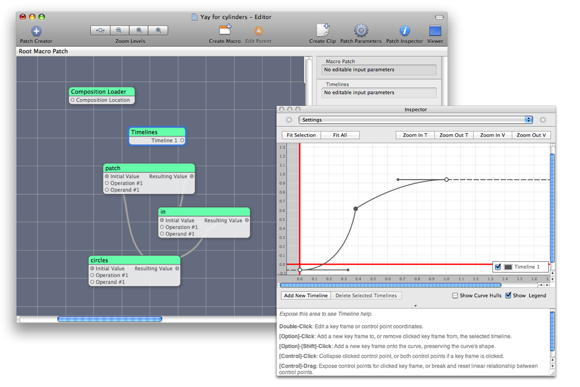 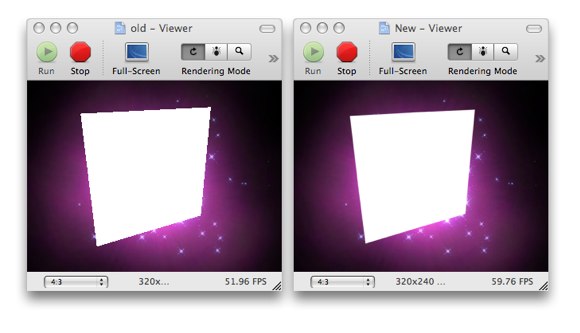 No more silent movies: The Movie loader in Quartz Composer now supports audio out – flick the switch for Asynchronous Mode. This is a handy to have, but it does mean the Quartz composer timebase is ignored, so some more testing will be required.

OSC and MIDI: Leopard brings a new OSC (OpenSoundControl) client and server patch, as well as improved MIDI support which will excite many CDMers. Ed.: MIDI support means you can plug in keyboards and control surfaces and support that more easily. And OSC opens up other options, like use with the Monome open-source controller hardware. See the OpenSoundControl site … and, really, nothing about it really is specific to “sound.” Open Control would be better. -PK

Multiple screens — or multiple projectors: There is now support for running Quartz compositions across multiple screens, and also a cluster. From the Release notes:

Updated: Here’s a look at some of those hidden patchers in QC. 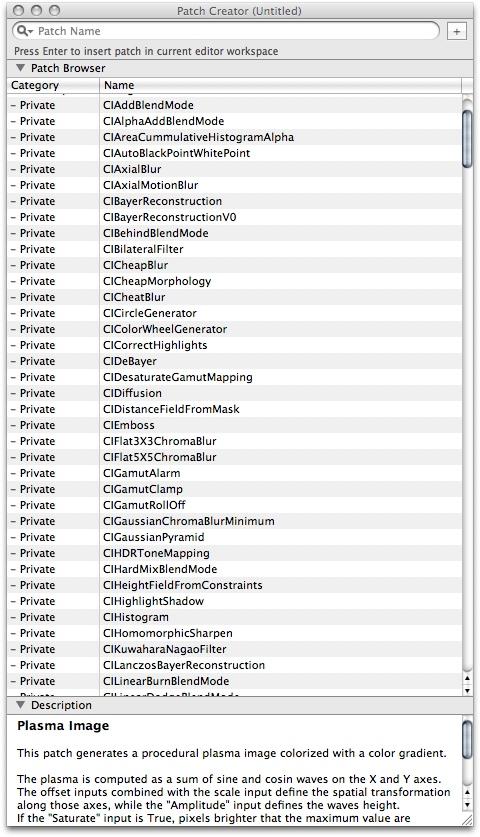 Overall a great update. Sources tell CDM that there is a stack of ‘Private’ patches left in there, which didn’t make the cut for Leopard. So we may still see even more interesting patches from Apple in a dot release. Third-party patch developers, such as the well-respected QC guru Sam Kass, are excited by the possibilities that this new version of Quartz Composer offers. In addition, Apple is now encouraging the sharing of Compositions between applications, so this may encourage more developers to get on board the Quartz Composer locomotive. For the non-developer, there’s a bright white light shining at the end of the tunnel, the possibility that one day, tools like Quartz Composer, Automator, and Core Animation may be combined to let the average mom and pop knit together simple, yet stunning, software applications for their own personal needs. There’s no question that Quartz Composer, like many patching environments, is difficult to manage when used to build bigger projects. Making structural changes is still a chore, requiring much manual rewiring, and QC still lacks any simple graphical way to build logic systems, or complex or dynamic processing structures. Other Cons include a steep learning curve, which has only been slightly bettered with the new templates, and a clumsy interface. Therefore, with Leopard, Quartz Composer will remain a niche, if not more powerful, eye-candy tool.. but overall, for types like us, Quartz Composer is a really cool tool that is well worth the time getting to know. 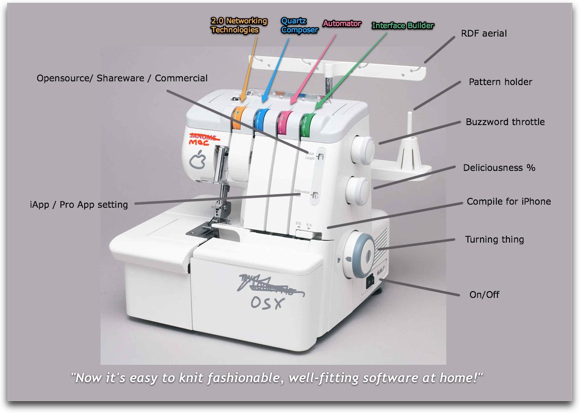