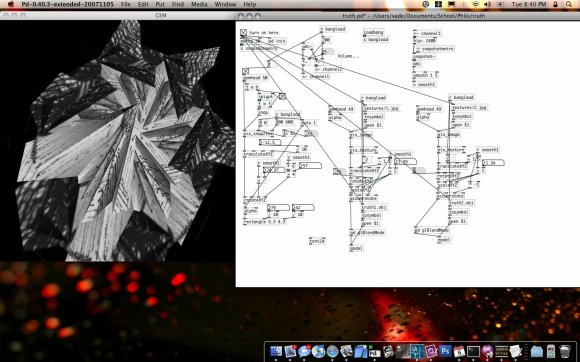 Pd as eye candy? Believe it. vade sends this shot of his work with Pd on Leopard.

Pd, aka Pure Data, is the free and open-source cousin of Max/MSP/Jitter. It’s powerful — even sometimes having technical advantages over Max — but has suffered from complex installation and dependencies, poor documentation, and an unpolished interface. Enter Pd-extended, a distribution that fills in those gaps. Pd-extended’s maintainer Hans-Christoph writes up what this is all about in an introduction on Create Digital Music, friendly even if you’re new to the Pd world.

Visualists should be especially interested in this latest release, because it offers much-improved out-of-the-box support for custom-patched 3D and video — especially if you’re on a Mac, for the PiDiP (though there are Windows and Linux improvements, too, and GEM works even with Windows).

And lest you have a bad taste in your mouth from the fugly older releases of Pd, Anton (vade) sends along the picture at the top of this story, showing the new UI from the Pd 0.40 dailies running on Mac OS X. Anton is also working on porting some of his brilliant visual patching from Max to Pd — and he’s living proof that even a Max die-hard can find at least some use with Pd, too. (The two environments are really, really close — sometimes confusion switching between them is because they’re so close, the differences can be confusing.)