Quite a few of you raised an eyebrow when we topped our gift guide with the Canon HV20, an affordable (as little as us$700) HDV camcorder. Like the New England Patriots (that’s American football for the rest of the world), the Canon HV20 appears to be largely unbeaten as the best-available visualist-friendly camera. It’s small, it’s light, it’s cheap, it does HDV, ’nuff said. It’s also eminently upgrade-friendly, with indie producers adding 35mm lenses and nifty accessories. And even those of you with larger, more powerful cameras occasionally want something you can toss in a backpack or use as a backup.

But that got me wondering — is the HV20 really One Camera to Rule Them All?

I have a couple of candidates I think could be interesting.

The big rival as far as HDV appears to be Sony. The HDR-HC7, for instance, has more sophisticated manual controls than the HV20, and I like Sony’s night-shot mode for extreme infrared applications. It’s also a little heftier than the Canon, in a good way — it’s a camera I find comfortable to hold. cnet even likes the Sony better than the HV20. (camcorderinfo.com begs to differ; see their link below) Like many things in life, it looks even cooler in Japanese.

Unfortunately, "manual control" on a consumer-level Sony means navigating the horrible touch screen interface, and worse yet the HDR-HC7 introduces a bizarre new manual focus multi-function control. (Translation: some strange add-on bit of plastic that’s utterly useless for controlling anything.) All that said, I do like Sony’s cameras, despite their quirks. 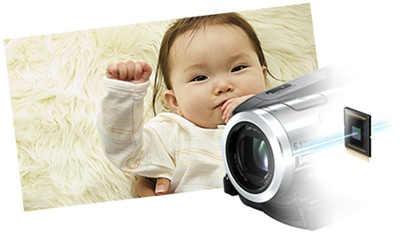 Another reason I wish I’d been born in Japan: look, infants there are actually born with their own CCDs!

The HV20 has some other advantages going for it, as well. Shooting quality looks great, and the Canon takes non-Canon accessories, whereas Sony is stuck with a proprietary accessory shoe. In fact, the general hackability of the Canon is a big part of its appeal. Search "HV20" and you’ll find all kinds of tips for squeezing more capabilities out of this popular camcorder. But the HV20, value-priced as it may be, can’t compete on features, manual controls, and low-light performance with even the compact consumer standard-definition cameras of the last generation. Too bad those models have all been axed so Sony and Canon could declare the "dawn of the HD era."

The other alternative: skip HDV altogether. I love HD resolution, and HDV is far better than AVCHD for video quality. But HDV is still not the easiest format to edit, and it’s even worse for live use. (VJing with HDV? Ermm… no, even though I have heard our own vade has started using ProRes live.) Then there’s sound quality, which is compressed by default — meaning you may want to carry around a mobile recorder anyway. (Compressed audio is fine for output, but it knocks out the ability to do much post-processing, like noise reduction.) 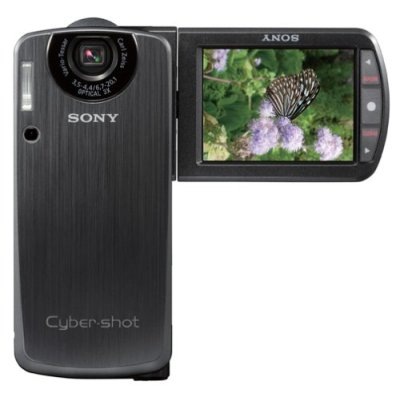 Here’s an idea: MPEG4. Cameras like the Sony Cybershot DSC-M1 (above) shoot natively in MPEG4. Shoot, then drop immediately into a VJ set — now that has some appeal. MPEG4 also works nicely for uploading to online services like our favorite, Vimeo.

And then there’s standard def. Panasonic’s SDR-H200, for instance, has a street price even lower than the HV20 (under US$600), records to hard drive and SD card, has a 3-chip sensor, and most importantly, shoots well in the dark — the Achilles’ heel of all these tempting, affordable HD cams. No tapes means you can transfer straight through USB. The bad news: MPEG2 compression, which looks crap. My dream camera would feature really high-quality standard definition capture, basic manual controls and accessory options in a small form factor (no need for bulkier, higher-end models), but would use MPEG4 on a hard drive. Apparently, camera manufacturers don’t believe this is what we want.

In fact, what I come back to is that the ideal rig would include an HV20 for HD footage on the go (or something bigger, like Jaymis’ preferred Sony HVR-V1P). Then add a used standard def camera for everything else — particularly low-light shooting, which is critical to visualists and interactive artists for documentation purposes.

So, having thusly muddied the waters does anyone have any smart thoughts? (Hey, I’m more useful on music gear — and music gear makers are generally more useful, not being massive Asian electronics companies. Then again, if music gear worked like video gear, a Korg OASYS would cost $499 by now.)

I’m particularly interested to know what good standard def cameras are floating around used/refurb. What do you use for documentation / capturing footage / general video destruction? And is it better to just embrace the HD, get the HV20, and, you know, find some more light? (May have to change my vampire-like daily life, huh?)

camcorder.info’s massive year-end review. In short, they like the HV20.

And here’s the basic score:

So, uh, yeah, that kind of means the Canon wins, huh?