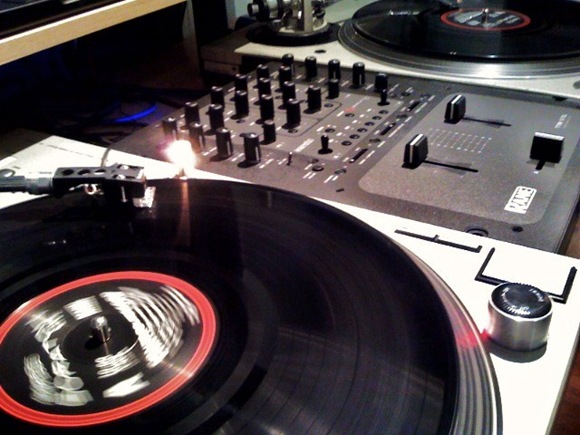 DJs are spoiled for choice when it comes to melding vinyl turntablism skills with digital mixing. But visualists have had no real mature option. Serato’s VIDEO-SL plug-in promises to change that, when coupled with their Scratch LIVE software and the Rane TTM-57SL mixer. To give the results a real shakedown, we turned to dj rndm and Robotkid, an audio-visual duo out of Boston who had already been frustrated with existing alternatives. Is the VIDEO-SL the breakthrough product visualists have waited for? -PK

Scratch LIVE v1.8 and Video-SL 1.0 boast the ability to not only mix video alongside your digital audio tracks but to give it groundbreaking control via Rane’s TTM-57SL mixer (required). After several anxious months of anticipation, we recently got our hands on the fader of Rane’s newest DJ gear to see how well it lived up to the demo shown at last year’s NAMM event. This progression of audio/ video integration seemed too good to be true, especially for those of us wrangling with the likes of Virtual DJ and Ms. Pinky.

When the Video-SL plugin ran for the first time, we knew there was no going back.

The Video-SL interface blends seamlessly into the Scratch LIVE window and functions with the same ease and readability known from previous iterations. The plugin includes over two dozen video effects and sixteen different transitions to layer and transform your video content in real-time. Most of the effects and transitions are fairly standard. While Serato has no immediate plans to allow for user-custom transitions and effects, they did tell us that adding new ones is relatively easy, and they say they hope to add new content based on feedback from the Scratch LIVE forums.

One of the most important features in Video-SL is its “set video track” feature, which allows you to link any video file to an existing audio file. This allows for more content customization and gap-filling. Once a video file has been linked, the software automatically associates that video file the next time the audio track is loaded.

Video setup feature proved equally customizable: you can adjust your output settings, video quality and buffer size. An onscreen readout displays current FPS to make sure you’re not exceeding hardware limitations, frame size, and whether or not certain graphics effects have been restricted based on your available hardware. We tried using V-SL set to a minimal buffer size and the highest quality setting, and had clean output with no frame dropping or tearing (thanks to the inclusion of V-Sync in the software).

Video-SL supports a number of video codecs, though the most widely-accepted are QuickTime-based. The H.264 QuickTime codec did an amazing job of looking brilliant while saving us a ton of precious hard drive space. In fact, of all the files tested, these seemed to be the most successful and should prove to be the codec of choice for most video crates. Unfortunately, neither MPEG1 nor MPEG2 (and .VOB) is currently supported for playback. Serato tells us that support for more codecs is coming. In addition to supporting MOV, MP4, M4A, AVI, FLV, MPG, MPEG and DV files, V-SL will attempt to play all third party codecs as well (DIVX proved successful during our testing). Audio and video playback are separate, so even when certain codecs caused V-SL to crash, Scratch LIVE would remain playing audio unscathed. The V-SL plugin would reboot in a matter of seconds with only a simple flash of your output monitor background. Needless to say, having two separate applications is a very smart and reassuring feature for live performances.

One major point we discovered during our testing is that using higher-end effects and transitions will be limited based on graphics processing hardware and is assessed by the software. While your 2Ghz MacBook will handle the basics, you’ll need the power of a MacBook Pro (or PC equivalent) to get access to most of the features. If some features are restricted, you’ll see a note on the graphics readout saying “fx are restricted” and “transitions are restricted.”

Ed.: I had a chat with Serato about technical requirements, and we came up with this: your best bet is a dedicated graphics card with at least 128MB of VRAM. The PC side is pretty close to the Mac side here, with more options. Based on my GPU-programming experience, I’m pretty happy with an ATI X1400 or NVIDIA 7400 mobile card or better. For those of you who like the nitty-gritty, Serato recommends a card that supports Frame Buffer Objects, GLSL 1.0 or better, and shaders with at least 120 instructions. That’s pretty basic, so aside from “integrated” graphics cards with shared memory, most recent mobile GPUs will work. And while it wasn’t entirely optimal, even rndm’s MacBook was able to work, using integrated graphics. 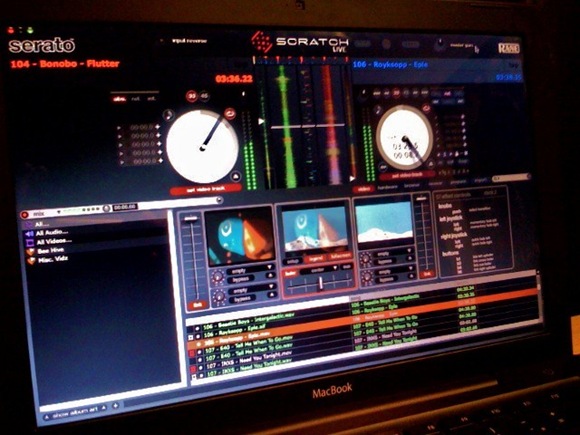 The most progressive aspect of Video-SL is its use in conjunction with the TTM57-SL mixer. As noted earlier, the Video-SL package will only work alongside the 57SL, so DJs using Scratch LIVE with an SL 1 box will be left out in the cold for now. But the advantages of the 57SL are extremely tempting, even when weighed against its hefty price tag. The 57SL runs directly into your laptop via USB, meaning less cables, less gear, and greater convenience when switching between analog and digital formats. You can control nearly all the elements of the Scratch LIVE software with the 57SL’s knob, joystick and button controls — tools that helped us avoid the QWERTY keyboard altogether.

It’s the highly-effective control features of the 57SL that remain its greatest selling point. Linked video and audio faders do everything needed, from fading video on the volume sliders to cutting and transitioning video while scratching on the 57SL’s magnetic crossfader. V-SL also allows you to use your headphone cue slider as a separate video fader, and all of the faders have the option of being unlinked. While the bulk of our testing was done with vinyl in Absolute and Relative modes, the Internal mode definitely caught our attention. In Internal mode, DJs and VJs can use 57SL mixer as a standalone controller, allowing users to cue, pitch adjust, effect and mix A/V tracks without external CD or vinyl controllers. [Ed.: Seems like that might be a waste of the Rane if you never mixed, but the flexibility to use vinyl in some situations and internal operation in others sounds very useful. -PK] 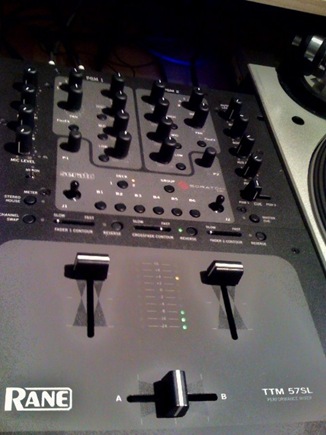 We ask Serato: why require the Rane mixer?

rndm and Robotkid were thrilled with the integration with the TTM-57SL. It’s a terrific mixer, and having an out-of-box solution for both mixing and control is a big leap forward. But users naturally still want to know why Serato restricted VIDEO-SL users to the TTM-57SL, so we got some further clarification on that issue from Serato’s Dylan Wood:

VIDEO-SL 1.0 has been built from the ground up to be tightly integrated with the TTM 57SL to provide a seamless all in one video mixing solution. Initial support is limited to the TTM 57SL as it is the only product in the current Scratch LIVE hardware line up that can provide the realtime control and integrated audio and video crossfading that VIDEO-SL requires. In future releases as the feature set of VIDEO-SL expands we will look to introduce support for other hardware from the Scratch LIVE line.

That’s pretty much it really, with the TTM 57SL it’s all an all in one simple solution with no configuration or messing around to get it going. For a DJ the one crossfader does audio and video, simple and easy.

That’s how we like things, especially since this will be a lot of our users first time with Video.

We are looking to support more Scratch LIVE hardware in future but there are no firm plans yet. The integrated fader and effects control isn’t possible on any other Scratch LIVE hardware currently and we feel that the high resolution control data coming off the TTM 57SL is one of the big upsides of VIDEO-SL.  People of course will want it to do midi control etc but as soon as you make a solution more open you complicate it as well, we’ll get it right like it is and then we’ll think about expanding it.

Of course, the proof is in the pudding, and the fact that rndm felt the integration was a key advantage of this solution means it looks like Serato nailed this for their target market. If you’re happier with software and MIDI/OSC controllers, though, there are alternatives we’ll be looking at, for a different style of visualist. 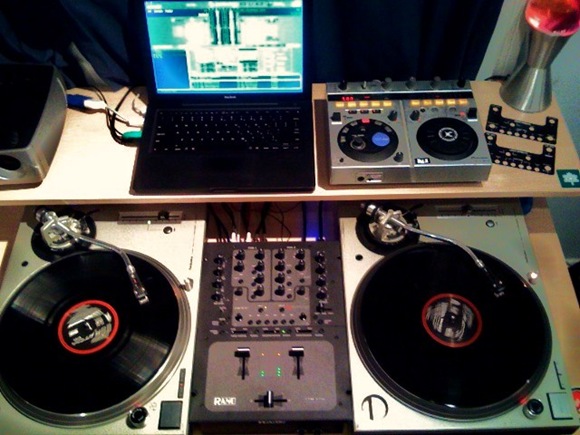 The overall performance of Video-SL in conjunction with the TTM-57SL mixer and Scratch LIVE 1.8 is undeniably solid. The integration of software and hardware is seamless and performs with zero latency. It’s also the highest output quality we have encountered using timecode-based mixing software. Even the most technical scratches and mixes are translated precisely into visual form,
helping to create the fuller more multisensory experience. The ability to interface, use cue points, looping, and built-in FX directly on the mixer will allow any user to go deeper with their live routines than ever before.

While the cost is the most notable concern, those DJs/VJs who’ve been in the market for Pioneer DVJs know that the TTM-57SL’s $1500 price tag plus the $200 Video-SL plugin (available now) is a bargain compared to the several-thousands of dollars that one could spend. Rane and Serato have surpassed all expectations with the addition of Video-SL. This triple threat of software and hardware should set a new high standard as the line between DJ and VJ gets a whole lot smaller.

DJ RNDM, aka Todd Robertson, hails from Boston, MA where he has been rocking the wheels of steel since the turn of the century. These days you can find him remixing beats and visuals alongside VJ Robotkid for party-goers, club-heads, and music aficionados alike. More info and precious downloads at: www.djrndm.com