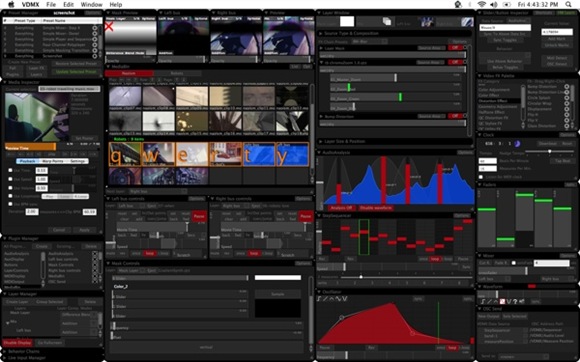 VDMX, the “realtime video studio” from the makers of Grid, semi-modular live visualist tool for Mac, and very possibly the “world’s most mature beta software”, continues to pack goodness into each new beta release. But the most recent addition, just now available as part of the primary public beta release, warms my heart. The latest beta adds support for OpenSoundControl or OSC, a protocol for communicating between computers, hardware, and software. With high-resolution data, an open-ended naming scheme, and network savvy, OSC is just plain better than MIDI at at least some tasks. But it’s suffered from a lack of documentation, a vague specification that’s a bit too open-ended and daunting to developers, and most of all, a lack of critical mass as far as tools. One small step at a time, that’s changing.

So far, the VDMX developers have tested their implementation with the multi-touch Lemur controller and inter-app data with Apple’s free Quartz Composer. But OSC is also supported in Processing, Max/MSP/Jitter, Pure Data, and free controller implementations for the Wii remote and Wacom tablet, among many other things. It’s also supported natively by the Monome controller, which is quite a lot cheaper than a Lemur. Want to pipe data from a Wacom into Quartz Composer? Sync data between a Mac running VDMX and a PC running vvvv? Something … uh … else that I haven’t thought of? Quite a lot is possible.

And an iPhone implementation could come next. (Or you can send OSC from iPhone right now, with MrMr.)

You can try this out in the beta that’s available now, though David Lublin from Vidvox warns us:

…there’s still more to do with OSC, currently no way to trigger files, it’s just control data, but the core functionality for sending and receiving is there, so we really just need to start building on top of that for whatever protocols there are to support

…the OSC support is still very much in it’s early stages.. it is there and stable, but we are barely scratching the surface of what we can do with it

Of course, that description could apply to OSC in general, which is why the two CDM’s (createdigitalmusic and createdigitalmotion) will be working over the course of 2008 to work with users and developers to share knowledge and get better implementations in everyone’s hands sooner. It’s something I hope to check in on while I’m at NAMM next week. Stay tuned.

Speaking of multi-touch OSC implementations, we hope to catch up with CyberPatrolUnit, who’s working on a VJ interface on Lemur, as pictured below. He’ll be bringing it to the CDM NAMM party, so if you’re in LA, come see us next Friday! 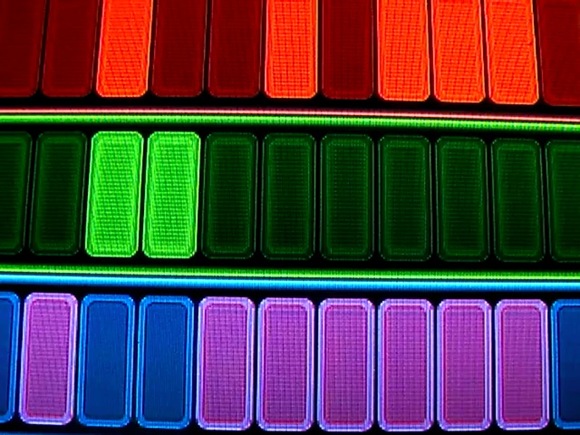