As digital musicians have realized for some time, working with computers is all about physical control. It’s the difference between feeling like you’re operating software and playing an instrument. So it’s no accident that Jay Smith is quick to call the Ohm, a new hardware controller for visuals and music, an “instrument.” I got to hang out at the Hoboken, New Jersey office of Livid and play with the Ohm a bit. Hands-on experience is everything: as you can see, you’ve got a nicely-crafted wooden crossfader piece, for starters. Here are some first impressions. The Ohm isn’t just a controller for visualists; the moment music people saw it, at least some thought DJ/music controller. Jay confirmed that customers were split between music and visuals. But at least in Livid’s original conception, the Ohm is set up to be especially useful to VJs and live visualists — and, in particular, Livid’s Union software, which comes bundled with the device.

You get a basic, semi-symmetrical layout of controls: The unit includes MIDI out plus USB, as well. The result is solid and heavy, but I was surprised to find that in person it feels pretty comfortable to hold and shouldn’t be too tough to port around, especially compared to some other gear.

So, how would you assign those controls? I had seen Jay perform before, so I assumed he’d use the four sets of faders as mix buses, to control different layers. In fact, his preferred assignment is to use them for effects parameters, as seen above. With the knobs controlling, well, “knobby” settings, and the faders doing things that feel right on faders, that’s eight settings per A or B bus, and Jay used the buttons and additional knobs for more control. There are two knobs on the right side that could impact some sort of master parameter, like the fade to black feature on an Edirol V4.

That’s just one assignment, though. I could see this mixer-style layout being used in other ways, as well.

Union has some nice MIDI assignment features, seriously beefed up for the Ohm in the most recent release, as we saw earlier this week. One nice function is the ability to use a MIDI trigger as a “shift” key, so you can combine, say, one of the Ohm’s buttons with a pad and have it perform a different function. I don’t think this will work with most other packages, but any app that allows you to use MIDI to select buses will work nicely with the Ohm, and since it’s sending all standard MIDI messages on channel 1, assigning to your tool of choice should be no problem if you prefer Resolume, VDMX, or another app over the bundled copy of Union.

That said, a couple of quick notes on Union are in order. A reader complained about the QuickTime-based media support on Windows, but I can at least say Jay confirmed Union screams on his Core Duo Dell laptop under Windows XP. A lot of Union is based on Max/MSP/Jitter, and I’ve found that Max is, for the most part, as happy on Windows as it is on Mac OS. Also interesting in terms of the Max support is the fact that you can use Union’s open API to build your own modules for Union.

There are lots of choices for visualists today — some of them diverging from Union’s relatively conventional mixer / layer / effects model. But if you are looking for an out-of-the-box VJ experience, Union should at least be on your list to consider. The important news is that the hardware feels fantastic. The build quality here is really professional, and gives the impression of using a high-end, boutique device. I loved Jay’s previous Viditar and Tactic controllers, but they definitely felt more like DIY projects. This feels like a finished piece of gear.

The pads in the center are similar in dimensions and design to the Monome, though I prefer the Monome’s tighter feel (especially on the recent Monome revisions) to the gummier, more conventional pads on the Ohm. For video triggering, though, this is about perfect, and I can’t think of another controller that combines the essentials you’d want for visuals in just one package in this way — A and B bus controls, crossfader, and pads — at least, not without chaining M-Audio Trigger Fingers or something. (It’s mystifying that there aren’t more devices with a similar setup out there, but then, that’s what drove the Livid gang to make one for their own use!)

Most importantly, the crossfader feels really wonderful. It’s a work of art, and I wouldn’t be surprised if wooden crossfader bars show up elsewhere. 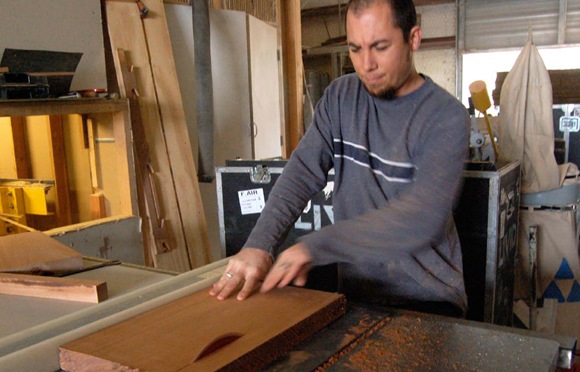 I expect some people will balk at the Ohm’s US$790 price — at least, if they’re not interested in the fact that the full version of the Union VJ software is included. But the Ohm really is made by the Livid crew in Austin, Texas. Boards and pads arrive pre-assembled, but things like the woodworking and assembly are literally done by hand, with some help from an on-site C&C machine. (Photos courtesy Livid Instruments.) All in all, the Ohm is an impressive and versatile device. Some DJs may like it, though I think it is likely to disappoint other music users — the pads aren’t velocity responsive, and there aren’t enough knob for more than a couple of general effects returns and one filter sweep per channel. But for visuals, it’s a really ideal layout and configuration for a lot of applications. And it’s nice to see, finally, software-hardware integration that makes sense, on an application serious VJs actually use — as opposed to the intriguing but flawed efforts by Numark on NuVJ and Roland on the Edirol motion dive .tokyo performance pack.

For my own use, I think I’m staying loyal to my own evolving controller rig — but I’m equally inspired by the effort from the Livid guys. It’ll be interesting to see them develop the concept, and I hope more visual-focused control is in our future in the visual community in general.

And if you don’t much like the Livid product, or think you could do better, they’ve got some good news for you — you can put your money where your mouth is. (Or, at least, put your knobs where you want them.) The brain of the Ohm will be released as the MIDI DIY, a board that can be used to make sophisticated custom MIDI hardware — especially as it can support 128 note on / note off contacts and 32 control change contacts, something no other generally-available DIY solution presently does. More on that as it becomes available. It’s probably not the right choice for your first-ever custom MIDI hardware, but if you’ve got some experience under your belt, it could be interesting.

What’s your favorite hardware? Any chance you’ll be c
onsidering this? We’d love to hear from you.