The era of the visualist has come to an exciting point. From a relatively fringe activity, we have seen tools and techniques develop quickly over the last couple of years. The idea of a VJ as a performer is steadily gaining more public mind share. Along with this growth, hardware and software concepts from both new and established developers are helping to further expand the possibilities we have for production and performance.

One of the most exciting groups to enter the VJ consciousness recently is Vixid. They’ve been working on their VJ mixer – the VJX16-4 – for several years, and it finally started hitting the market in 2007. 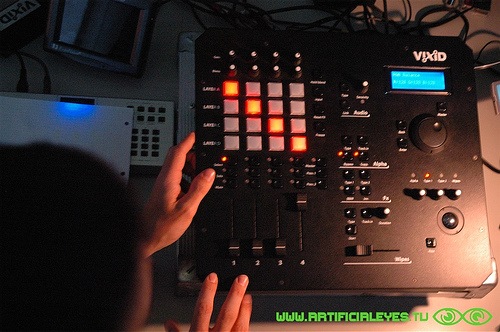 Unlike the other semi-recent entries to the vision mixer market – Numark’s AVM02 and Pioneer’s Big Expensive Thing – the VJX16-4 isn’t just an incremental upgrade to the basic task of "mixing between two sources of video". Vixid have designed it from the ground up to be a considerably more advanced way of working with live video.

Fortunately, Michael and Todd of artificialeyes were available to guide us through this exciting and slightly confusing new world. We shot many hours of video with the ae guys at ByteMe Festival last December, including plenty of time with the VJX. First up: An intro and overview to this superb piece of kit. The video runs for 10:30. Considerably longer than we’d intended to make these CDMtv videos, however we believe the Vixid is such an important and potentially influential piece of hardware – and such a big investment – that you’d want to get more detailed information rather than a superficial overview. For those who are impatient or feeling texty I’ll follow up the video with some of my first impressions and thoughts.

To me the most exciting aspects of the VJX are the blend modes and layering/switching matrix. My biggest frustration with hardware mixers has always been that they are confined to basic alpha-style A/B crossfades. When performing with software such as Resolume I never use the Alpha blend mode, as it tends to dim and muddy your video sources when in the middle of the transition. Using more "advanced" modes such as Lighten, Darken, Additive, Subtractive etc. is great in software, but the effect is compromised if you then have to revert to a grubby old alpha blend when mixing your sources in hardware. For this reason I do very few long crossfades in my performances, and the crossfader never remains at the midpoint between sources. My V4 or AVM02 spends most of its time as a glorified switcher, or as a backup for when those occasional software crashes occur. So Vixid’s inclusion of these "Photoshop-style" blend modes has instantly raised the mixer’s slot in my rig from a simple switcher to a more artistic tool.

The matrix-switcher and flexible routing system is the other aspect which has really caught my imagination. Initially most people seem to be confused by the 16 input, 4 track setup, perhaps expecting the mixer to have 16 channels which can be selected from and blended like a quartet of V4s. How the system actually works is that each track can select from any of 2 composite and 2 S-Video inputs, then the 4 selected inputs are layered with their selected order, blend modes and opacities. Similarly, the outputs are divided in to 3 channels which each output to S-Video and composite together, and these outputs are switched internally, so they can each be used for a projector, preview monitor, or sent off to an outboard effects unit which is then re-routed back in to one of the Vixid’s inputs.

This is all reasonably complicated on paper, and when using the VJX it takes time for your "traditional" mixer conditioning to be gradually replaced by an intuitive understanding of the abilities available with this strange new beast. However, once it begins to filter in to your brain, it’s impossible not to be inspired by all the possibilities opened up by this new way of working.

At €2500 (US$3700ish) this isn’t the mixer for everyone. If you’re just starting out or on a reasonably constrained budget there are other things you should probably be spending your money on. However, if money isn’t the most pressing concern, I can’t see a visualist lining this up with the other options below $10,000 and choosing anything else.

This is only the most superficial look at the VJX16-4. I was able to spend a couple of hours with artificialeyes’ unit and a video camera in Perth, so I’ll have some more videos on the subject to come. We’re also hoping to be able to get a unit for some more extended reviewing, tutorials and performances as soon as possible.