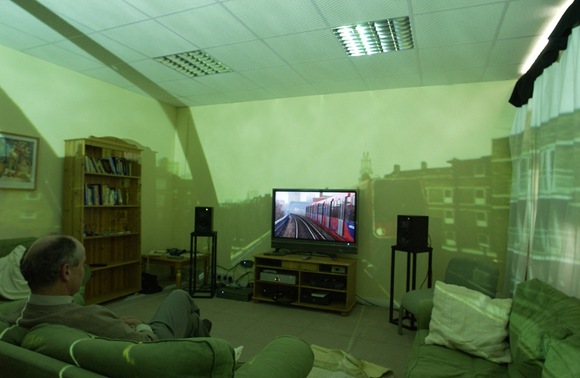 The picture says it all. BBC Research & Innovation is considering presenting video in surround. Just as audio surround assumes a still-central source, enhanced by additional material in the 360-degree audio field, the idea here is to capture ambient visuals using a fish-eye lens and then project that beyond the screen.

Of course, whatever the (uh, dubious, potentially) practical applications of such technology, there are plenty of compelling directions this could lead VJs. In general, the ability to control more of the environment and break out of the rectangular frame helps live visuals and installations. And there are other consumer, examples, as well: TV maker Phillips has toyed with creating ambient, colored light that matches the on-screen image with Ambilight, something DIYers have already cloned (see Hack a Day).

Hmmm.. I think BBC should just give us all projectors and we’ll go work on it, eh?

Graham Thomas, one of the researchers, explains:

Surround Video is a means of visually immersing the viewer into a TV programme.

It is like surround sound, an optional extra that enhances viewing on a normal display. The idea is to use a wide angle (or fisheye) camera fixed rigidly alongside the normal camera shooting the programme, and project the image onto the walls, ceiling and floor of the viewer’s room.

Wait, you know, this could have practical applications — making English children hide behind the couch even more readily during Doctor Who.

Via ChromaTouch, aka Leon Trimble

Did MIDI Just Turn 25 at NAMM?

Craig Anderton’s Tribute to Moog: Rapture Presets, and a Call to Save History

research
Weddell seal vocalizations are cooler than your synthesizer, and we’re still learning more
inspiration
Hard as queer: Brutal Gegen releases and videos capture a party that’s defiant as ever
experimental
GEMA is a delay pedal effect-synth that rumbles like an earthquake, by Senyawa x Squaresolid
inspiration
Vangelis has died at 79, as the electronic music world mourns