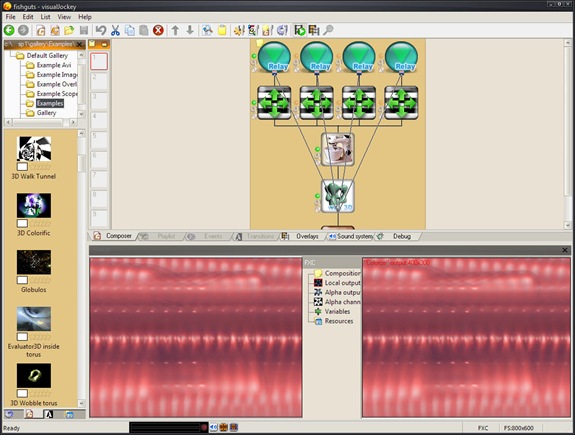 Blending patching, performance, and timeline metaphors, with a healthy dose of effects and sound capabilities, VisualJockey is a unique tool you can now have for free. Need an excuse to load Boot Camp, Mac users?

The Mac may be in the spotlight these days, but Windows may boast the broadest access to freeware and open source tools for live visuals.

The latest edition: VisualJockey, as pointed out (alongside other free Windows tools) by beatfix on comments.

You get a pretty powerful set of tools in this app, first introduced in 1999:

In fact, VisualJockey’s approach I think is unique — a set of tabs controlling different approaches, a hybrid blend of other interface paradigms. Want a timeline? A reactive sound system? A modular, generative 3D patch? It’s all in there. The UI is decidedly retro, and you get more flexibility from true modular patching environments, but at this price, if you feel like you want another tool in your belt, it’s hard to resist. And with export, this could be handy to have around alongside your existing tool of choice.

But VisualJockey is just the start — here are a few more from beatfix (and me):

vvvv — perhaps a reason to use Windows in itself, with gorgeous DirectX rendering capabilities, a massive, active community, and great documentation — including hooking up to unusual physical inputs. Proprietary, but free for non-commercial use and cheap even for paying gigs. 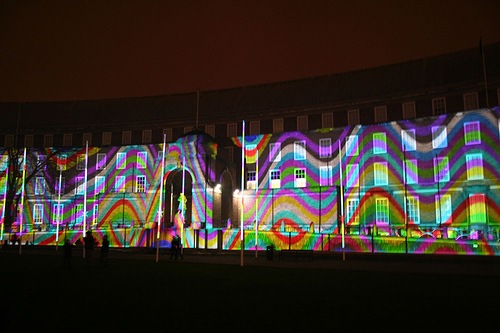 vvvv lights up the night in Bristol.

OpenTZT: full-featured, quite popular VJ app — unfortunately, development has halted, so if you want to maintain this and you’ve got the code chops, go for it — the project is seeking programmers.

EffecTV Video effect, peculiar but perhaps useful in your tool belt for special effects or as a code example

And cross-platform tools, many also on Windows and Mac:

GEM for Pure Data, an open source cousin to Max/MSP/Jitter with some powerful features of its own — and excellent support for GEM on Windows (it was originally written for Windows and SGI)

I’ve heard concerns about the “poverty” aesthetic among VJs, but if you have to get work to make money, starting on a budget can be a way to go. And with powerful tools like GEM and vvvv that have few equals even in the payware/proprietary world, there’s no reason you can’t mix some free goodies in with your paid tools of choice.

Did we miss anything? Let us know in comments. And yeah, we’ll have to do a round-up for Mac (though pickings are slimmer, outside Quartz Composer and Pd) and Linux (which has more options).

Sonic Sampler: What’s Been Cooking in the CDM Forums?