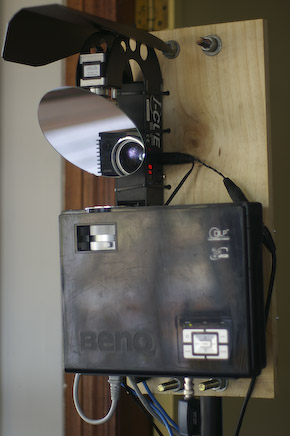 Lighting designers rely on DMX in a similar way that electronic musicians use MIDI; it’s the glue which binds their performance together. Many older (as in age, not experience) VJs I meet have come to live video performance through a profession in lighting. Younger visualists tend to have been attracted to the artform through work or study in film and TV, or a love of electronic music and culture. These people (like myself) may know that DMX exists, but have no real experience with the protocol, or the gear it controls.

So when artificialeyes demoed the VMS system for Peter and I at ByteMeFest in Perth last year, I was struck by how simple this step into the lighting world could be. Todd and Michael were using off-the-shelf VMS projection units and controlling them with a clever little open source USB DMX controller called the uDMX, which includes software to translate midi messages into DMX.

So when it came time to plan for the 2008 album launch tour with Bobby Flynn, my desire to expand the impact of our show (while keeping to an extremely restrictive budget and baggage allowance) put a moving video system right on top of my list of possibilities. In the end we didn’t have the cash to invest in VMS, but taking Peter’s previously tried route of mating an inexpensive Rosco iCue robotic mirror with the projectors we already had in our rig was a simple backup plan. For around AU$1000 each (around $600 in the US), plus a trip to the hardware store, we now have two functional (if currently rather ugly) DMX controllable video moving systems. 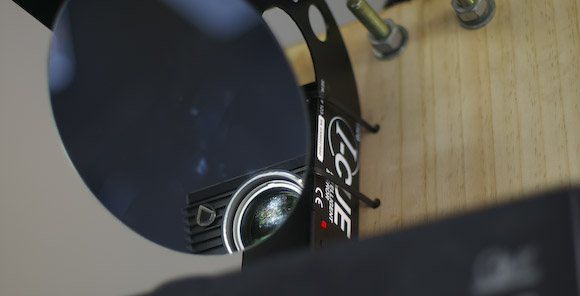 Currently I’m using Ableton Live’s session view to trigger MIDI clips which send the mirrors to a certain location on stage, or run them through motion sequences recorded from a midi controller or sketched directly into the Live interface. The iCue mirrors have a mode which causes the mirror to reverse all pan instructions, so perching one unit on each front corner of the stage gives me a good coverage, and in small venues is considerably easier to setup than traditional projectors, which are generally mounted to whatever is available, and which may not have the correct throw distance or angle to fill screens. 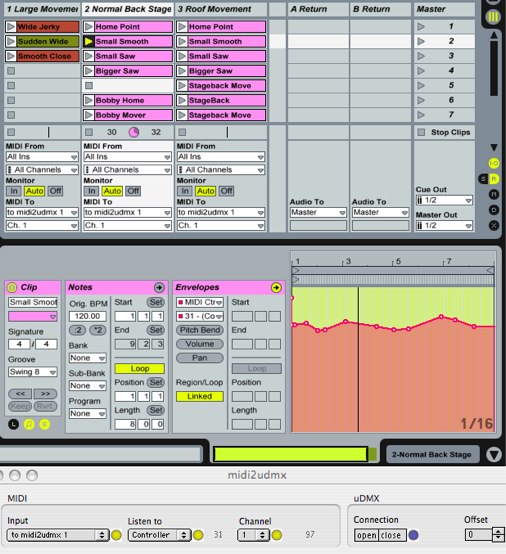 After performing a week of shows with this dual-iCue setup I’m definitely sold on using mirrors to augment the impact and increase flexibility of video. However, it’s not just as simple as strapping mirrors to your projectors and going ahead with your normal set. Aside from the issue of controlling the mirrors, as soon as you leave that 4×3 screen and start moving around the stage and walls, the default rectangular projector image looks out of place. Imagery such as text, photographs or live video is no longer able to convey a literal, representative meaning, as it may be unrecognizable, highly distorted or out of focus through much of its journey around the stage. For the same reasons, high-contrast imagery has considerably more impact than subtle tones and gradients. There is definitely a place for representative video in this setup, but you can’t just press play and expect it to look great and convey meaning or emotion to your audience.

Software designed for generating abstract imagery (such as artificialeyes’ upcoming 3L, which has obviously been designed with an eye to this kind of setup) will be able to make the move without much trouble, but if you’ve spent years building up a massive library of clips you may need some time editing and testing to discover what works. I found that VDMX’s flexible layer grouping and media bin assignments allowed me to setup a “mask” layer with a selection of black and white, high contrast mask videos triggering from a dedicated bin. Whatever software you use, being able to select whether to apply effects pre- or post-mask is invaluable, and you may find that you start to favour different plugins than those used when confined to a static screen. Effects such as kaleidoscope – which I rarely if ever used before – are now finding their way into my set in multiple places. 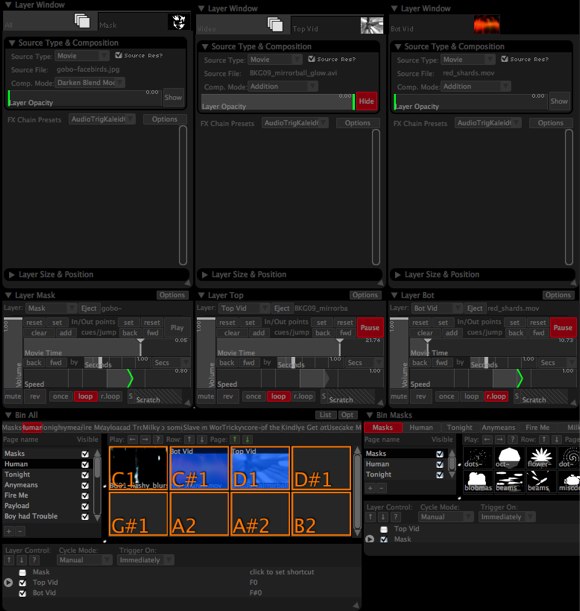 VDMX’ flexible interface with a dedicated media bin for masking

All of this abstract video does lose some of the emotional response afforded by simple, representative images, so I think my eventual direction – for this type of show – will be to combine both static screens and moving projections. This will of course require multiple sources, mixers etc, as well as more projectors and screens. Not really realistic for the casual VJ who is fighting for reasonable pay and infrastructure from club owners and promoters, but for touring shows, larger clubs or collaborative installations it’s not particularly difficult to get a couple of extra projectors together, and the additional impact is definitely worth the effort.