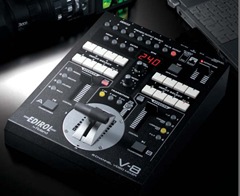 The Edirol V-4 has been the standard mixer for years, leaving people desperately wanting a sequel. Korg tried with the KrossFour, but what they came up with was mainly a V-4 wannabe — a welcome DJ-style crossfader couldn’t make up for the lack of differentiating features, and the V-4’s elegant layout. And Edirol’s own HD-resolution V-440HD wasn’t priced for mortals.

The Edirol V-8 promises to change all of that.

First, Edirol has wisely copied the satisfying control layout of the V-4. Hate on the V-4 if you like, but I think we take for granted how cleanly-designed and intuitive that layout is. The V-4 isn’t a perfect mixer by any means, but by encouraging mixing flow, and creating an affordable mixer that worked well for a broad audience, they did create a major hit.

What’s great is that the V-8 adds what the V-4 lacked:

And this all comes with “DV-quality” video processing, 4:2:2 full-frame digital with 500 lines of resolution for processing, mixing, and output. That’s perhaps not all that much in the computer age, but it’ll do — especially if Edirol has kept the price down to Earth. Some of the new effects and transitions are fluffy, but there is a new feedback effect and, more importantly, horizontal flip. There’s also improved support for V-LINK audio sync, but until there’s wider implementation on the software side, I think the hardware features will be more significant.

VJForums reader sleepytom points out that the output fade now works on your preview output, too — and there’s a looping preview out.

The only really bad news: you can’t mix two computer inputs, you can only switch between them. Still, this is a huge leap into the computer age for Edirol, and long overdue. Addendum: I figured this went without saying, but since CDM contributor vade points it out, the tradeoff — as with the V4 — is resolution for convenience and economy. So you get reliable, easy mixing, but you have to be willing to settle a bit in an age when computers are pumping out HD (and better) resolutions — we still haven’t seen anything economical that can mix that in hardware, though there’s always the option of adding a switcher so you can use more than one input, sans mixing.

PS: Edirol, thanks for making it black.

Availability: this month. That is, assuming it doesn’t immediately sell out — which it probably will. Expect backlogs even worse than the V-4.

Pricing: not sure; trying to find out. Word from the show is GBP1099, though those of you here in the crippled-dollar US, I expect we’ll get different pricing.

Discussion at VJForums, which also mentions the P-10 MJPEG sampler / SD card “presenter” product coming out — more on that if we see anything

The V-8 doesn’t have the sophisticated blend modes, customizable control powers, or matrix-style routing of the Vixid X16-4, the other live visual-ready mixer we’ve been watching. But then, the two aren’t really comparable: just as the Vixid promises to be the high-end mixing option, the V-8 could (depending on its price) become the new mainstream benchmark. Stay tuned.

Yo, if you work for Edirol, give us a holler. Yeah, I know. You went to Germany because you think there aren’t any VJs in America. But you can talk to us anyway. CDM is, like, global and everything.

Thanks to Josh Randall for the tip!

Hardware
Knot makes USB host pocket-sized, now on preorder
previews
Korg drumlogue has it all: analog, samples, digital synth, SDK
Hardware
A bubble wrap-popping organ, by Simone Giertz and team, is sure to be your new favorite thing
Hardware
Synthstrom Deluge gets an OLED screen – and you can retrofit existing gear