Despite the many gigs I’ve played in my time as a VJ – including over 80 in the last year of touring – I am yet to record my output on a single live show. It sounds terrible, but I know I’m not alone in this: Both musicians and visual performers I’ve worked with tend to focus on creating the show itself, rather than documenting the output. Musicians have a plethora of hardware available for recording audio, and the visual market is starting to get some wider options. 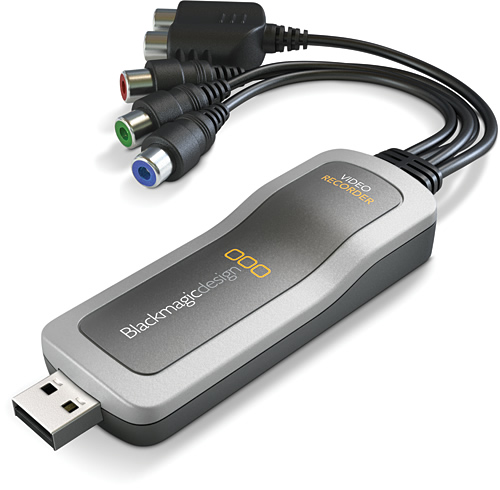 High-end video hardware creators Blackmagic (previously on CDMo) have released the “Video Recorder” (not sure if I’m keen on that product name), a $200 USB device which will “record” analogue “video” (ok, turns out I’m fine with it) in H264 format straight to your hard drive.

The base model lets you choose from Component, S-Video or Composite, and for $100 more you can get the SDI version; for all of those production houses which inexplicably don’t have any devices which allow capturing of video to computers.

Currently only Mac software is mentioned on the Blackmagic site, but that does look quite friendly, with simple buttons to select the source and output formats, and an interface for cropping out analogue weirdness from the stream.

There are other devices which fulfill similar roles, such as the aforementioned Pinnacle Video Transfer (available now), or “multimedia” hard drive enclosures from dubiously-able manufacturers, but something which isn’t much bigger than a thumb drive and coming from a company known for their high-quality video devices could just succeed. (via Gizmodo)