Rolling Your Own Blu-ray Discs: It’s Not Far Off Photo: Billaday, via Flickr. I think the label says something about Blu-ray being awesome, and don’t stare into the laser, and go buy a PlayStation 3 because you really need one.

During the high-definition wars, your feelings about new higher-capacity storage discs may have ranged from ambivalence to dread to simple disinterest. (Well, that’s how I felt, anyway.) But with Blu-ray triumphant comes this realization: "hey, brain, we’ve suddenly got increasingly-affordable ways of burning high-capacity media!" Drive upgrades on the PC side cost what DVD burners once did, and if you’re hooked up to a TV, the writer can be your player, too. (There’s already a Lite-On internal drive for around US$350, and I expect these prices will plummet as production ramps up.)

Here’s one of your first options, from Blu-ray Kings Sony themselves. Earlier this month at NAB, Sony announced an update to their DVD Architect authoring software; version 5 will support Blu-ray authoring. Authoring features will be "complete with full motion buttons, motion menus, scene selection menus, subtitles and alternate video and audio tracks." Naturally, all of this is integrated with their video editor Vegas.

Sony’s pricing is ridiculously cheap, too: US$50 buys the entire DVD Architect tool, and the upgrade will be free to existing Vegas Pro users. Vegas Pro 8, for the record, is currently US$450 street, compared to US$1300 for Final Cut Studio. Now, in fairness, Final Cut Studio does quite a lot more (3D motion graphics, Compressor batch processing, advanced color tools, and so on). But Sony’s bargain pricing could justify keeping a cheap PC around, especially since Sony’s software is light on system resources.

Of course, the one thing that isn’t cheap is blank Blu-ray discs, which are running about US$20-25 a pop when I last checked. Then again, you can grab a rewritable for $25 if you want to be an early adopter. And I think with these other pieces in place, those astronomical prices won’t remain for long. Ramping up production on Blu-ray — instead of competing with HD-DVD — should mean economies of scale take over. It wasn’t so long ago blank DVDs cost $25, too.

If you don’t need real authoring with menus and such, your options for just burning video to Blu-ray are more numerous. Vegas Pro 8 supports Blu-ray disc burning even without the DVD Architect update, right from the editor — you just burn a menu-less HD video to disc, which may be more useful to readers here anyway. Apple Compressor and Adobe’s CS3 suite have similar features; Premiere Pro CS3 can output a video to Blu-ray, just as Vegas can, on both Mac and Windows. See Dave Helmly’s blog (from Adobe) for a recent discussion of how to work with Encore, Premiere, and Apple Compressor.

And yes, I imagine complete Apple support can’t be too far off, either, once Blu-ray writers become more popular. (As noted in comments, Apple Compressor supports MPEG2 export for Blu-ray, but DVD Studio Pro doesn’t yet have a complete set of authoring tools for menus and the like.)

With Blu-ray discs, writers, and software finally becoming available, it shouldn’t be hard to do the math here. We finally have an easy way of writing our high-definition content, and wrapping it up in menus (though not the fanciest of Blu-ray menus unless your day job is at a big disc production house; see below). Sony also suggests making picture slideshows (of very big pictures, evidently) or music compilations (okay, sounds good).

I’ll say this: if you’re investing in a Blu-ray player, especially for a computer, it seems worth holding off for a writer. And consider this an opportunity to turn a PlayStation 3 into a tax write-off. 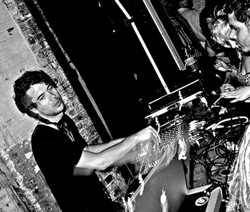 Now the less-awesome news. Part of the Blu-ray spec provides not only greater capacity and higher-quality audio and video, but more interactivity, via a Java virtual machine and a new format called BD-J. It is real Java, written as Java code, if based on the ancient Java 1.3. Even networking capabilities are included. It will go far beyond DVD menu scripting — that is, if you find a way to author BD-J.

The problem is, it’s not clear whether Sony thinks mere mortals should have access to BD-J authoring. (Too bad, as this could be great for installations or distributing richer content.) Sony did show off Ensequence’s On-Q Create software at NAB. It looks … expensive, though. You have to talk to sales to find out how expensive; generally not a good sign. The word "enterprise" also gets mentioned, in regards to Sony’s higher-end Blu-print software. That’s curious, because the word "enterprise" usually doesn’t get bandied around people who work in this kind of production. That’s a word IBM and Microsoft use, not motion graphics people and interactive designers. (Bizarrely, too, the On-Q software itself is written in .NET, not Java.)

Of course, that said, I never really expected BD-J to be anything other than an archaic art practiced by big authoring houses. So I’m not sure why I’m mentioning it at all, except that we like Java because of Processing and Java creator James Gosling likes to talk about how cool Java in Blu-ray is, and Java people like to talk about how uncool it is that they can’t actually code for Blu-ray without giving Sony lots of money.

Big production houses, though, feel free to keep subsidizing our cheap copies of DVD Architect. Oh, and make sure that those Blu-rays we go buy are fun to use.

Gorgeous and Out-there New Art and Music, Inspired by Radiohead