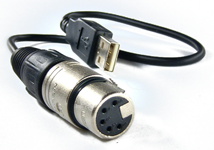 As we strive for more immersive, cohesive shows, DMX is a great tool to have in our visualist kit. Whether a full theatre lighting rig or just a couple of dimmers and a strobe in a club, the ability to plug in and take control of an existing rig means that lighting can now work with your projections, not compete with them.

One very exciting piece of gear brought to Perth last year by artificialeyes was the uDMX USB DMX controller. The uDMX is exciting in a different way to gear such as the VJX16-4 or the VMS, rather than being a new and more VJ-friendly take on existing tech, it very common concept – the DMX controller – distilled down to its tiniest, purest form, and then open-sourced for good measure. 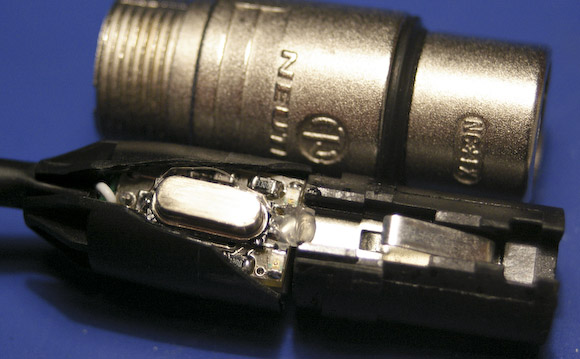 The Anyma guys have managed to fit all of the DMX control circuitry inside a regular XLR jack. This makes the uDMX about as compact as it’s possible for a DMX controller to be. As DMX uses regular 3- or 5-pin XLR jacks for cabling, you can literally grab the uDMX, some spare mic cable, an adapter or two, and then get your DMX on straight away! The uDMX-Midi Interface Software (Mac) is extremely simple, monitoring a MIDI input source and converting (scaling from 0-255 to 0-127) either Note-on or CC messages into DMX messages. These are sent through the uDMX on the same DMX channel as the MIDI message controller or note number. It also has the ability to offset messages, which gives a simple method of scanning around DMX channels to find out where lights and other gear are located without following cables or looking at jumpers. Anyma have also released a Max/MSP external (Mac, Linux and Windows), PD external, and a command line utility (Windows, Mac and Linux).

I haven’t tried the uDMX yet with Windows, but as mentioned in the iCue article, getting it working on Mac is an extremely simple affair. For Windows there is a plugin for the freeware lighting control software DMXControl, which has MIDI in, so that could be a solution which doesn’t require custom coding or paid 3rd party software.

So, it’s a very simple device, which does a reasonably simple job, but the possibilities for use are staggering for a visualist who is used to a reasonably antagonistic relationship with many lighting operators. I’ve used the uDMX on a recent run of shows to control two iCue robotic mirror systems with midi sent from Ableton Live. However, if the hardware or VJ software you’re already using can output MIDI, then you may already be able to incorporate the uDMX in to your show without adding any extra machines to your rig or running heavy software which increases CPU load.

The uDMX is reasonably expensive at €180 (around USD$280, plus shipping). There are cheaper USB-DMX controllers available – such as the USBDMX, or Enttec Open DMX USB – but none which have the simple, compact beauty of the uDMX. For those who have the expertise and inclination, the uDMX is open-source – all of the hardware schematics and code is available so you can build one yourself. As *Spark mentioned recently (and we noticed with the VMS), after spending so much time in the 4×3 white rectangle moving your show to the rest of the venue can be extremely powerful. There are definitely realistic options for the visualist on any budget or platform though, and DMX is a great weapon to have in your belt to use in the fight for better pay and recognition.

Ghetto-Fabulous Digital Vinyl: Make a Mouse Into a Turntable