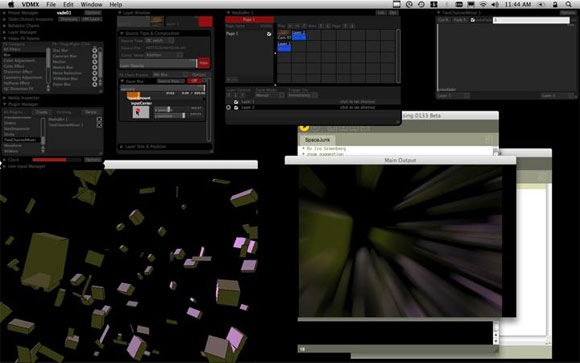 CDMotion contributor vade sends word of some experiments he’s been doing with inter-application video sharing. The basic idea: start with live imagery in one place (like a Processing sketch, for instance), and feed those visuals into another app for adding effects, mixing, and output (like VDMX). Naturally, you’d want to do this without a performance tax.

vade’s solution – Mac-only – uses live visual capture to send the output of one tool to another, all on the GPU. Performance looks great, but the big problem is that the window has to stay in the front. Still, I can already imagine uses for this.

That’s just one approach, though. Could we eventually even have a full-blown inter-application visual routing solution, one that might work between apps, platforms, or computers? I can imagine a few approaches that might work, though performance is always the challenge.

Moving Music: 10 Ways for a Music Geek to Move House

MacSoftware
IK’s model of the Neve 1081 console is free this month, plus free EQ and metering
Software
Celebrate your Blue Monday with the choir sound from New Order – and Kraftwerk’s Orchestron
MacSoftware
Dorico 4 is finally engraving-level notation with MIDI editing powers, in a single tool
Software
Bespoke visual noise is the next domain for Robert Henke – so let’s revisit Perlin, anyway