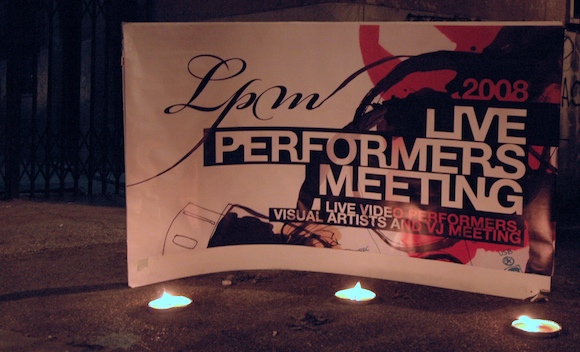 The fifth edition of LPM brought 240 visualists from around Europe to the edgy splendour of Rome’s Mattatoio di Testaccio for a four day program incorporating 60 a/v performances and 60 vj sets. With a peer-to-peer philosophy and an open-submissions program, it was really encouraging not only to see practitioners in the field get to meet and exchange over the four days, but to see such a high quantity of considered audio-visual works, and an impressive quality overall. Todd Thille reports, with some extra reportage by me. 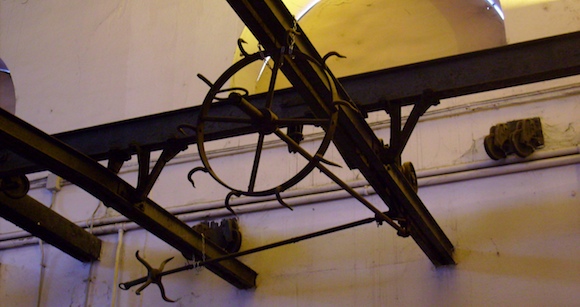 Walking into the 900sq.m of the elegant Macello IV hall, the festival instantly had character as with the experience of seeing the impressive array of screens came the realization they were suspended within a lattice-work of industrial-age slaughterhouse machinery, wrought-iron runs and strange barbed chandeliers hanging aloft. The FLxER crew had installed 13 screens in the cavernous space with a stage at each end and an A/V nerve center in the middle with places for the late night VJ sets. The setup was ideal, enabling a new performance every half-hour from late afternoon to late night, and quality touches like VGA cabling throughout and a V440HD mixer on each stage ensured a dramatic impact. 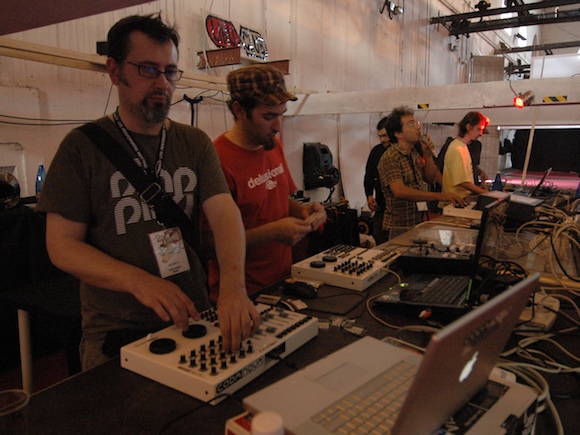 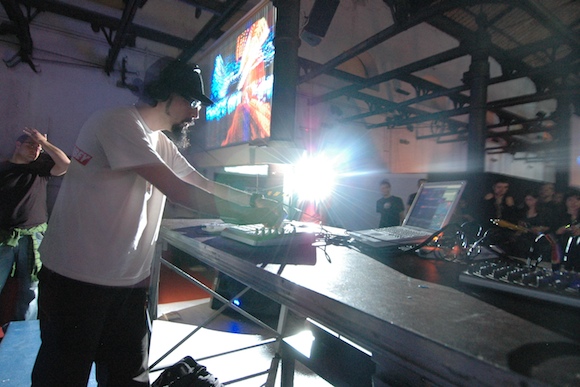 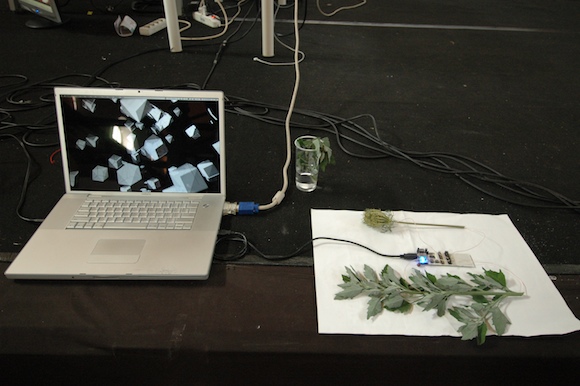 Performances began in the late afternoon. The impact of the first few were deadened a bit by sunlight drowning out the screens. But with over 250 artists being slotted into 40 hours, some sacrifices had to be made. Many more VJs came with AV sets than have been seen in the past and at other festivals. Even if they were only using CD playback, the visual artists were taking control of their whole performance. Notable among them were live AV by Akira of Kiken Corp laying on 8Bits in all their Game Boy and Commodore splendor, Return of the Space Invaders vs =ff= had a tightly integrated performance in VDMX tracked to MIDI accompanying banging Dutch low-fi beats. Frank Sent Us offered a delirious send up of the Spaghetti Western. The BrandyAlexanderProject’s performance included live poetry. Synesthete acquired electrical signals from plants to create a live generative audio visual piece. 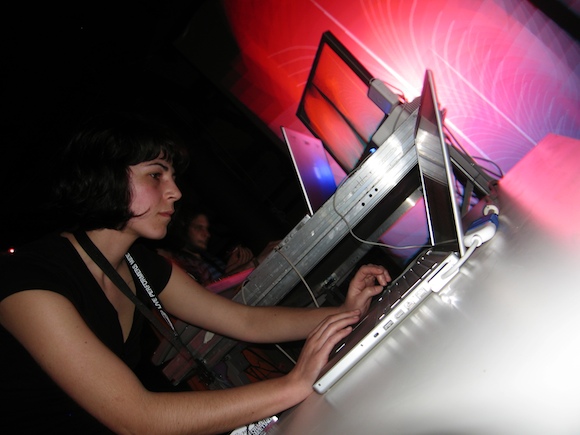 Spain was well represented by Negativo. The collective’s +AMOR A/V piece was a dark moody exploration of modern primitivism. pintaycolorea splashed the hall with colorful geometric forms. Madrid based Whiteemotion’s ‘Cuore International’ was made up of photographs, video loops and live camera. 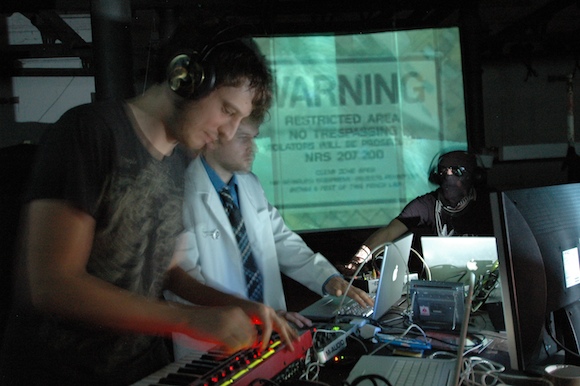 Return of the Space Invaders vs. =ff=

The voyeuristic gaze of the camera’s eye was evident in Visuallab’s IS YOU(omaggio a Sophie Calle), which featured surreptitious shots of women in public places,only to cut away just before they seemingly became aware of the intrusion. Several performers also trained cameras on themselves, becoming stars of their performances. The aforementioned =ff= filmed an homage to THX1138 in the festival environs prior to their performance. Half-Machine also shot footage on location and of themselves in an exploration of the city and their time in it. Deftoo à La Yoa (who marked her first anniversary as a VJ at the festival) filmed herself when she could not find anyone to film. fomoke donned a wire and vellum mask to perform her odnoto piece in front of her computer’s built-in camera. PacOnAzim’s “Mrs. Soopradean” was keyed into stills of social situations and feigned interaction with people depicted.

Straight VJ sets rounded out each night with 6 artists at a time bathing the hall with projected video. Highlights included local multimedia artist S.A.D., who performed a set with anatomical line drawings. Jna the AnimalMan, EleKTro mOOn, and Klipman were also impressive. 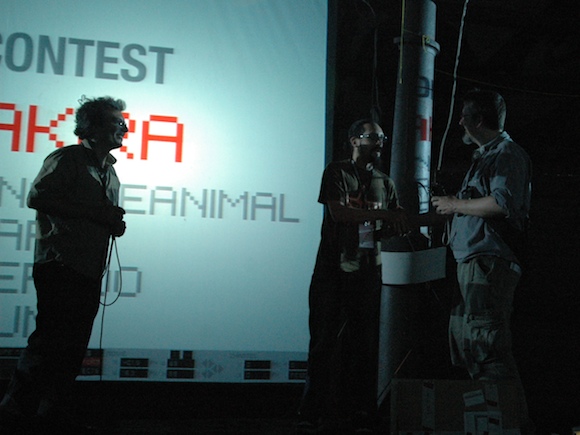 A VJ Battle hosted by Fefè Project was won by Akira. First Prize was a Codanova VMX VJ controller. Further prizes consisted of 4 copies of modul8. 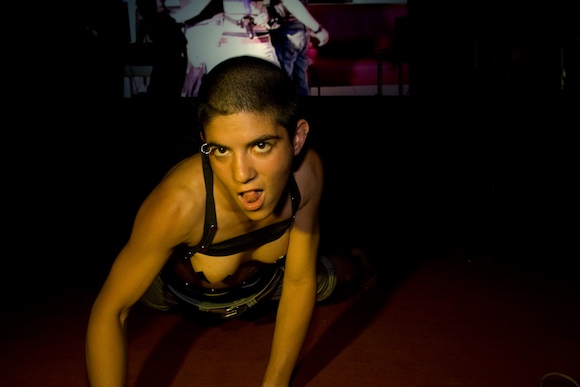 Networking was on the minds of a great many of the artists. Representatives of a number of crews, organizations and festivals (aie prod, AVFactory, AVIT, LPM, Mapping, Vision’R, Visual Berlin, VJ Theory, Yroyto among them) had seemingly all come to a realization that to progress the scene, the different organizations and events need to start collaborating to build on each other’s success. An infrastructure to start through pooling resources and knowledge should be in its nascent stages, and with it hopes to tour one festival at another and even make a festival-of-festivals.

All in all, LPM was judged a great success by those we spoke to. While the daytime program could have been better developed, and there was little variety in the format over the four days, the LPM crew managed to create something akin to the platonic ideal of a community-based vj event: a big room with lots of screens hosting a constant turnover of performances, and in it was everybody with no divisions between artist and public, organizer and attendee. You saw so much, and there were no barriers to exchange.

See also toby’s description of the VJ talks that were part of this event at our events.noisepages.com site, and if you have some ideas for how to document this kind of thing, say so in comments!

VJ Talks, and a Question of Documentation

Global VJ Nation: Next Live Performers Meeting will be in Mexico