I actually hadn’t had time to watch my tech RSS feeds yesterday when I said I “lost half an hour dreaming of my new lounge-style studio where I adjust envelope breakpoints from a giant aluminum sphere like the one in Sleeper.”

*Disclaimer: The following video, while demonstrating some insanely cool tech, may bore you to tears. In response to reader requests, we feel it’s important to warn you.

Now, of course, researchers being researchers, Microsoft R&D has taken a massive sphere controller and turned it into a mind-achingly dull slide show. I, on the other hand, could imagine kinky sci-fi electronica being made with massive hand gestures, particles spinning through space representing sonic grains, and the like. Microsoft, if you’re looking to hire someone to do something interesting with your giant sphere, I’m sure I or any one of the readers of this site can make something that couldn’t be replicated with a Flickr account, a toy bouncy ball, and a projector. This is the power of musicians. You try to make something absurd useful, but not really. We make the absurdly useless awesome. (Case in point: modular synthesis. Hey, is anyone using these giant telephone switchboards? Mind if we invent a new kind of party and welcome aliens to our planet?)

That said, let’s talk about just how much this is like Woody Allen’s sci-fi parody classic Sleeper.

Woody Allen, tech visionary that he was, clearly foresaw rubbing giant balls as a major future breakthrough in interface design. (For what it’s worth, the same film also predicted the 180 in fad diets that would exonerate protein and fat.)

Not only did Woody Allen’s character get strangely high with a large sphere, but the movie even suggested how to productize a more portable version of the sphere, as seen at right. Microsoft Sphere Nano, anyone?

In the classic manner of the future aging, then becoming hip and retro again, I’m not the only one now coveting a Sleeper sphere. It seems none other than Kanye West is gathering lots of nude models and, in elaborate choreography for his stage show, having them enact a giant be-in with their spheres, inspired again by Woody Allen. See some photos on Flickr, not quite safe for work, depending on where you work. (Oddly, I think this now means Woody Allen and Kanye West have exactly the same fantasy.)

And it’s back to the future in other ways, too.

The classic Keracolor TV has come back into fashion, and (as of last summer, at least) was being remade in a new edition. You probably can’t afford one, but it would look great with the Orion synth you can’t afford – and notice that its hull is more properly rounded. (At least one reader yesterday complained the Orion wasn’t as rounded as it could be.) 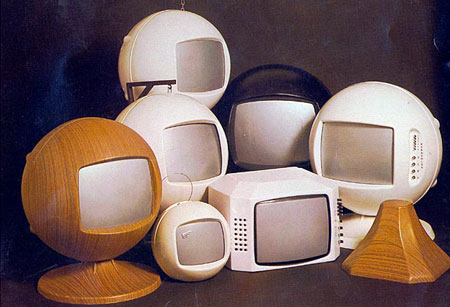 So, sorry, Microsoft. The future just isn’t what it used to be. Even Woody Allen’s future. And he was kidding.

Are You VJing Live With Processing?

design
Atari, at 50, leaves a legacy of electronic imagination in visuals and sound
design
Check this fanciful “old-school” retro tracker hardware and a cute groove
research
Weddell seal vocalizations are cooler than your synthesizer, and we’re still learning more
oddities
Crank it up: A noble and elegant simulation of playing French Horn for Playdate