It seems that live streaming gigs have really taken off recently. Either that or we’re just paying more attention since the fantastic NetLag show. Either way, there’s a bevvy of live streaming performances ready to entertain you this weekend.

Taking the stage tonight at 11:30PM EST (check the time) from the USA is 6-piece AV trance outfit SWiY, or Someone Who isn’t You. Who they are is 2 visualists, 4 musicians, and a load of gear, UV tubes, and fingerless white gloves.

Our setup consists of Plexiglas mounted trays and racks on a Pearl Drum rack, at like a 30 degree angle facing the crowd. As far as specific configurations and software settings, thats kind of our secret. But we do use Ableton Live to run our vsts and other various AV software tools. Although we use Live, we do have several other hardware devices capable of running the setup if our computers fail. Using MIDI we can control anything from anything. For example a keyboardist could use a foot pedal to cross fade a cdj via a kaoss pad. The same MIDI also would trigger a visual parameter within the TWO vj setups. The four guys on floor are musicians and run at least a 50-50 split of live and preprogrammed sequences. The other two guys raised up are vjs. 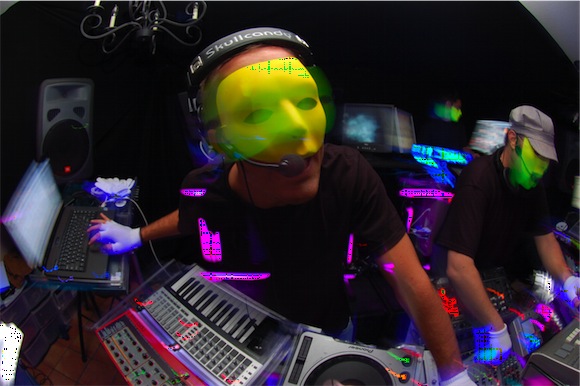 Trance is one of those musical forms which has both fanatical adherents and vehement detractors, so I’m not going to editorialize on the content of the show. However if you’re interested in the style or not, this looks like something worth checking out… For science.

On a more serious note: VJForums readers may already be aware of this event, as SWiY were caught out astroturfing on a variety of sites. I almost didn’t post this when I found out that they had been spamming forums, but I think the performance is interesting enough on its own merits. Pretending to be a 3rd party and posting the same thing indiscriminately is not a good thing. However, I’d like to be clear that SWiY did follow the right path in telling us about their project: Our contact form. We love getting unsolicited mail from people doing interesting things, but like most intelligent humans, we have reasonably fine BS detectors. If you have something great happening, you don’t need to pretend that you’re someone else to talk about it. Come out and say it.

Blocks of Light and Sound: A Mapped-Projection Audiovisual Sequencer

artistsmusic
The Daily Show takes on the Black and gay origins of house music
artists
A DIY violin with a spring reverb tank inside
artistsav
Weirdcore’s work Subconscious is inspired by raves and infinity GIFs, with Aphex Twin score
artists
mlre is an expanded version of the classic monome mlr, focused on performance