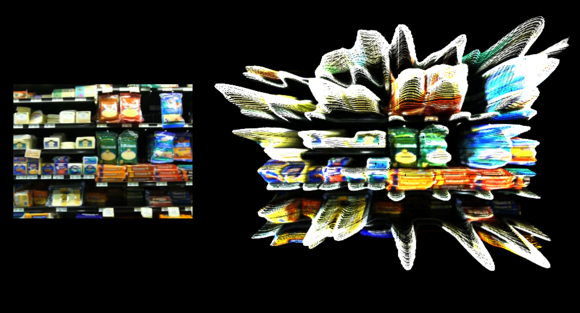 Ed. It’s one of the most important live visual inventions of all time — a visual creation on the level of something like the Minimoog for audio synthesis. And it’s now in software form. But just as importantly, there’s a chance to help its inventor complete his vision. -PK

Anton Marini, a.k.a. vade, has released the first public beta of the v002 Rutt/Etra software synthesizer, which is a leap forward in the simulation of the original, badass analog video synthesizer. Anton worked closely with Bill Etra himself, who gave invaluable feedback in the development of the software version. The Mac-only plugin is available now as open source donationware at 002.vade.info with sample compositions for Quartz Composer and VDMX. Ed.: This Mac stuff is all well and good, but I may work with Anton on looking at porting a cross-platform version, as well. And this ought to inspire other ideas in live visual synthesis – an area that has almost limitless frontiers to explore. -PK

Last weekend at a Starbucks in Chinatown, Bill dictated the following statement to me to accompany the release:

I’m Bill Etra and this is the Mac version of the Rutt/Etra Video Synthesizer.

In 1970, I spent a year with my partner Steve Rutt building a video synthesizer that let me have complete plasticity with the raster, which, incidentally, will disappear in February when analogue television broadcasts cease. After two years of very hard work, we had built the Rutt/Etra video synthesizer. I was sure that after some work with Bill Hearn to colorize the Rutt/Etra’s black and white signal using the Videolab, I would be finished and have the tool I wanted. It’s now forty years later and, thanks to Anton Marini and others who are kind enough to assist and do all the hard work, we have the beginnings of what I had dreamt of.

The dream was to create a compositional tool that would allow you to prepare visuals like a composer composes music. I called it then and I call it now “the visual piano”, because with the piano the composer can compose an entire symphony and be sure of what it will sound like. It was my belief then and it is my belief now after 40 years of working towards this, that this will bring about a great change and great upwelling of creative work once it is accomplished. This software is one step closer to that since, once we’re on the computer, things can be developed and repeated reliably.

I now live on disability and we no longer have corporate budgets to support this development. I would like to spend the rest of my existence working on the project that I thought I would finish in 1972. If you find this software useful, please make a donation in whatever amount you feel is appropriate.

Bill is sharp as a tack, funny and engaging, and continues to perform as a visualist despite chronic, severe pain from the rare, hereditary disease spinal stenosis, which also keeps him mostly wheelchair-bound. Your donations will go entirely towards supporting Bill’s ability to continue developing and performing visual art.

Here are some links to Bill’s work:

visuals
EboSuite 2.0 hands-on: live video recording and more makes VJing feel native in Ableton Live
history
Vangelis has died at 79, as the electronic music world mourns
3Dplugins
Percussa’s SSP Eurorack powerhouse does 3D, plugins, SDK – and kind of everything
history
May the 4th be with you, in a new documentary on the sounds of Skywalker