NAB, the “broadcasting” industry show, remains the event of the year for visual gear lust fantasies. We kicked off this week with new gear from Edirol, but that was just the beginning. Contributor Anton Marini (“vade”) weeds through the rest of the announcements for us, and finds some very tasty-looking equipment if you’re interested in getting HD video into your computer in real-time, or recording HD-resolution computer performances. The combination of this hardware with our faster-than-ever computers means that HD VJing and visualism is now more accessible than ever. -Ed.

NAB ’09 is winding down, and there have been a slew of announcements of new products and upgrades that run the gamut of super high-end real-time 4K playback systems to.. well, not so high-end. I’ve tried to pick through the details and find the announcements that may help change the game for visualists in 2009/2010, for both high-end professional VJs and hobbyists alike.

The key word this year is HDMI. 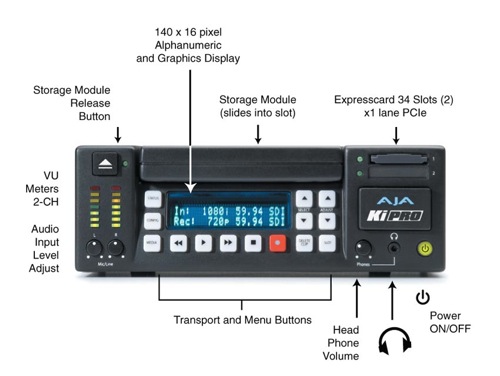 The Aja Ki-Pro is a field recorder. That’s a fancy way of saying it’s a stand-alone device that records audio and video to a hard drive. While Ki Pro is aimed more at higher-end production and post-production markets, it does allow visualists with the budget to do one thing we’ve all been wanting: Record your performances in HD, without compromise. 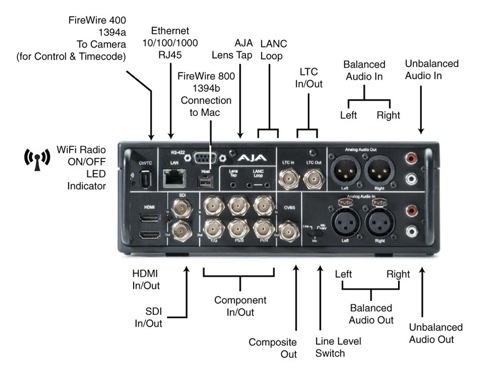 The Ki pro features a slew of professional inputs and outputs, and features niceties like 10 bit up/down/cross conversion, playback, LANC, rs422, gigabit Ethernet, Wifi, and a Web server (!), but the one thing we really care about is HDMI input and output. The Ki Pro records to Apple’s Pro Res 422, either via an internal hard drive which can be used as a FW 800 drive, or ExpressCard 34 storage. The choice of Pro Res 422 makes working with the footage a bit of a pain (Pro Res is only included with Final Cut Pro on the Mac, or a playback-only codec on the Windows), but it ensures sane bit rates and professional color fidelity, so your gig footage will look sharp and clean, unlike those muddy DV 25 recordings…

The Ki Pro also features HDMI 1.3a with “Deep Color”:

“Deep Color: HDMI 1.3 supports 10-bit, 12-bit and 16-bit (RGB or YCbCr) color depths, up from the 8-bit depths in previous versions of the HDMI specification, for stunning rendering of over one billion colors in unprecedented detail.”

This means you should be able to slap a standard — and cheap — DVI-D-to-HDMI conversion dongle into the rig and be able to record your set. I’ve requested confirmation from AJA about supporting RGB DVI via an HDMI converter box, and have yet to hear back. Im fairly certain this should work without a hitch, assuming you choose to output in some HD video resolution.

The Ki Pro will retail for around $4000. Read more at Aja.com or read the press release here.. 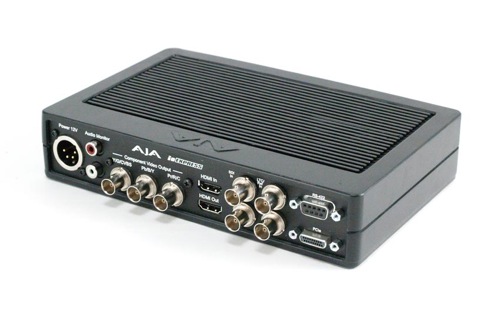 The AJA IO-Express has HDMI in/out, component and HD-SDI, and component input. No composite or S-Video here, and allows your laptop to ingest the following formats from a laptop:

AJa’s earlier IO boxes all support standard QuickTime Capture Components, which means that any software that uses QuickTime Capture should have no problem seeing and bringing in video. In other words, these are not meant just for Final Cut Pro. VDMX, Resolume, Jitter, Quartz Composer, etc. should all be able to use the Io-Express.

I’ve yet to hear back on what “limited HD” means, specifically, but the support for HDMI 1.3 deep color is there. That re-enforces the hope of DVI-to-HDMI-enabled capture. The Io-Express is expected to retail for about $1000; read the press release or go to AJA’s product page. 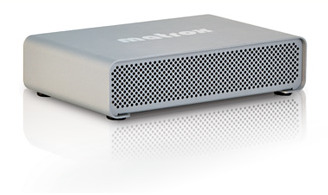 The Matrox MXO2 – Mini is a similar product, but may be closer to what visualists seek. It has HDMI, Component, Composite and S-Video (Y/c) inputs, and supposedly supports true uncompressed 1080 (they do not specify interlaced or progressive in their spec sheet). This means the Mini is really V4 friendly, and will work with your legacy analog standard-def video gear.

Matrox also states the MXO2-Mini supports standard QuickTime components, meaning all your standard QuickTime-friendly VJ applications ought to be able to capture from the Mini. Matrox does state that the Mini supports 10-bit HDMI capture, which hints at HDMI 1.3 support. That in theory means RGB capture from DVI. I’ve asked for some clarification on this, and the QuickTime capture support from applications other than Final Cut, but I’m optimistic that DVI capture should work.

The MXO2-Mini is a much more VJ-friendly $450; read the press release or the MXO2-Mini product page where you can read up on the details.

Ed.: Other NAB announcements we missed? Say so in comments. And if there’s any gear here in which you have a particular interest, we can try to nab (cough) it for review.

Auto-Tune The News, And Channeling Steve Reich, Anyone?