Building-Sized Visualism, on 1085 Windows, and More OpenFrameworks in Upcoming Events

lights on from thesystemis on Vimeo.

Digital visuals are often confined to a screen or a panel of wall. So there’s something magical about projects that get an entire building as a canvas. “Lights” is a live audiovisual performance for the Ars Electronica museum in Linz, Austria. The facade has some 1085 LED windows, controllable in real-time. The performance involved coordinating these windows with broadcast music.

The work was put together, stunningly, in just three days. OpenFrameworks, the artist-focused, C++-based code framework for “creative coding”, became a critical part of the process, assembling all of the real-time visuals. Zach Lieberman, co-developer of OF, also worked on the project and describes its ingredients and team:

this project was made as a collaboration between 4 different folks,
including daito manabe (musician & hacker), damian stewart (artist and
one of the creators of rjdj), joel gethin lewis (formerly with united
visual artists, where he worked on projects like massive attack’s LED
show) and myself (developer of openframeworks).
–> (daito) [daito.ws]
–> (joel) [http://www.joelgethinlewis.com/]
–> (damian) [http://frey.co.nz/]

we did alot of stuff with software that might be interesting for your readers — the tools involved (abelton, max, pd, openframeworks, dmx) and the challenges of a display like that, etc….

Breakdown of the tools:

Zach notes “what I liked about it was how eye opening it was to feel that you can use each tool for what it’s good for.” 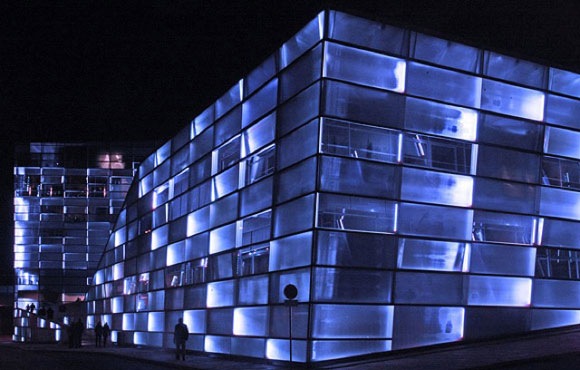 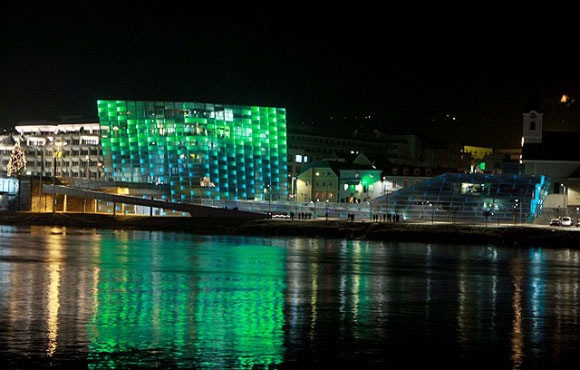 The LED installation itself is fascinating. Designed and installed by Multivision, some 40,000 LEDs cover 5,100 square feet. That might sound like a massive waste of energy in environmentally and economically uncertain time – until you start to do the math on the highly power-efficient LEDs themselves. LEDs operate on extremely low power and can output full brightness even at low energy levels, according to the installers, even when compared to fluorescent bulbs. The installation is the largest of its kind in Europe, but still manages to run on just 3-5 kilowatts for a normal night, saving an estimated EUR38,000, says that report. (You’re probably running a kilowatt at home right now, perhaps more.) 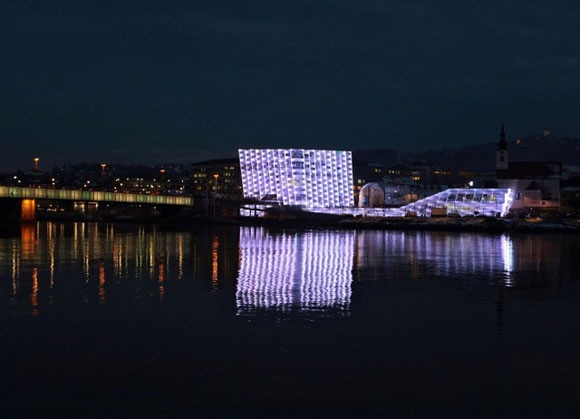 Most of us won’t be doing that kind of LED installation soon, but OpenFrameworks is available as free and open source software. And the timing here is good if you’re in either London or Japan – workshops on OF are planned for both cities. In case you aren’t already on the OF mailing list, details on those workshops below. (The London workshop has a number of our friends hosting.) Let us know if you make it, and hopefully we’ll share more resources on OF soon.

(Before someone asks, yes, I’m still planning some Processing tutorials; basically, ran into trouble when running a book excerpt proved harder than I had expected, but these are sitting on my computer just waiting to be finished. And learning more about all of these tools can make you a more informed digital artist, whichever you ultimately choose to invest most of your time.)

InteractiveArchitecture.org is pleased to announce a free public OpenFrameworksWorkshop on 13th – 14th June 2009 lead by Mehmet Akten, Marek Bereza and Joel Gethin Lewis and hosted by University College London’s MSc Adaptive Architecture & Computation Programme.
This is intended to be the starting point for a number of workshops usingOpenFrameworks with an introductory session suitable for people with no “oF” experience but some basic understanding of scripting in Processing, Flash, etc.

If you are interested in participating in the workshop please contact us immediately as places are limited. See this site, for registration information and details:
http://www.interactivearchitecture.org/openframeworks-london-workshop-june-2009.html

Zach: I am just working out the details now for timing, so I’ll follow this email up with links to websites, but I wanted to email anyway so that if you are in Japan you can save the dates.
I will be making a presentation of openframeworks at NAIST (Nara) June 18th, and an intro workshop in Hakata, June 19th, 20th, and 21st.    The workshop, like the London one, will be for beginners, but experts are also welcome.  Also, we will have a kind of informal meetup in Tokyo (17th) if any .jp OF folks want to catch up over Ramen.

Mmmmm, ramen and code. That might be worth doing even if you’re not in Japan.