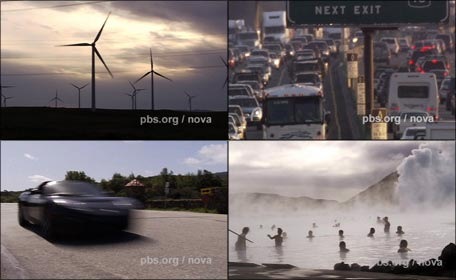 Stock footage has long been a VJ cliché, and remixes in and of themselves aren’t always meaningful. But in the right hands – just as in audio sampling – sampled content can take on new life. It might even find an unrecognizable form. And with publicly-funded documentaries, why not give the actual content back to the people who supported its creation, whether they render it as entirely new art or political material.

The US public broadcasting network, PBS, is doing just that with its Open Content series. For instance, I recently watched an episode of NOVA on the future of energy and automobile design. Raw footage shot for that documentary is available from PBS under a Creative Commons attribution / non-commercial license. (Read the rules.) You can see and download the clips here:

If you do live visuals, of course, some of this is a bit murky. Do you attribute the clips in a live set? What if you get paid for that night’s gig? Part of the problem with Creative Commons licenses is that, unlike a public domain license, you’re still somewhat restricted.

That said, I like the idea of encouraging the people making the content to actively share their work for reuse. Sure, a lot of free culture advocates just go and take what they want, and honestly, I believe there’s probably a benefit to that. But it’s also worth encouraging those who are making work freely available – and it’s kind of cool that documentary dailies could wind up getting repurposed by someone else.

It’s also worth noting that public broadcasting in the United States is not what a lot of you know in the rest of the world. Our public TV gets a tiny slice of its funding from the government. The bulk of the funding actually comes voluntarily from viewers, meaning this really is a community asset before a “state” creation. There’s a dark side to that – it’s a little ironic watching a show on the environment sponsored by ExxonMobil.

Found any other interesting Open Content from PBS, or other sources? Other ideas for how this kind of thing could be productive? I’d love to hear from you.

VBS Video: Curtis Roads on the Birth of Granular, Composing in Microsound