Part of what makes Resolume Avenue so compelling as a live visual solution is that it can mix, mash, and loop audio alongside video, in ways often resembling Ableton Live. But that, of course, doesn’t make Resolume nearly as deep a live sonic tool as Ableton. So, to combine two great tastes – live video in Resolume Avenue, plus live audio and elaborate sequencing control in Ableton Live – the folks at Resolume have assembled a recipe that allows Resolume to be controlled via Live using MIDI.

1. Route MIDI from Resolume to Ableton, using the IAC Driver on Mac and MIDI-Yoke on Windows.

2. Make a MIDI sequence in Ableton that controls clips in Resolume.

3. Add some audio clips and scenes in Live for some live audio goodness.

4. Link parameters and sync for effects and icing. 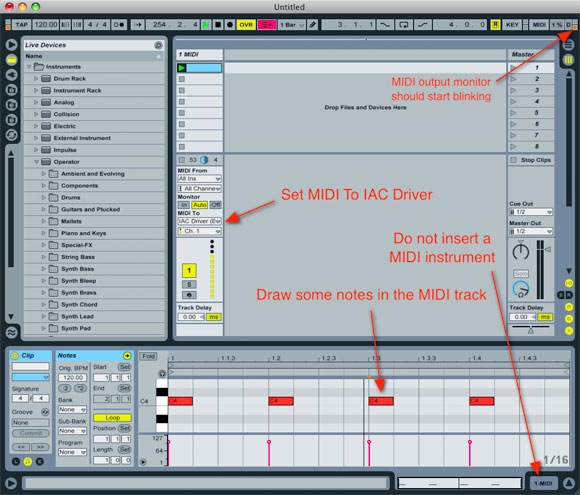 This does nothing to stop a fantasy I’ve heard other folks discussing of late: imagine if we had an OSC (OpenSoundControl) sequencer? OSC is by nature time-based as a protocol, and you could even still sequence MIDI events (using MIDI over OSC) – or arbitrary events that wouldn’t be restricted by overly rigid event types like the MIDI Note? Does anyone know if such a thing has been tried? (Maybe it’s time to write one.)

That’s not to take away from the beauties of Ableton Live in this sort of setup. Combining Live and visuals, whether to add audio or sequence visuals or both, has been an ongoing theme on this site.

And one instance of Live failing to be the tool for the job, only to be replaced by Max: Progress Report: 8 Cameras Plus Vixid Plus Patching Gives Craziness (Pd would work, too, which would be nice for a Linux netbook)

Now that Bart has gotten the ball rolling for Resolume, though, I suspect we’ll see a lot more ideas for combining Resolume Avenue with Ableton Live, or using Avenue as an audiovisual tool in itself; it just makes sense. If you work up your own setup or add your own twist after following this tutorial, let us know!

abletonMacWindows
The best way to integrate Ableton Live and Eurorack modular – for any rig
MIDI
MIDI Polyphonic Expression has been updated with one powerful feature: better documentation
Mac
May the 4th be with you, in a new documentary on the sounds of Skywalker
how-to
Quick tips: changing oscillators while live jamming with Arturia MicroFreak