Microsoft Research have added live, collaborative visuals to their bag of tricks for the Microsoft Surface multitouch table. Of course, in the process, they’re really demonstrating not only what you might to with Surface but with multitouch interfaces in general. In fact, it’s particularly odd that Microsoft hasn’t apparently made the connection with more generally-available multitouch hardware coming out, particularly with multitouch APIs built directly into Windows 7. HP is already shipping a mainstream laptop with a convertible, tablet-like form factor. And I don’t need to point out that this could lead to cross-platform, open source applications, not just those that run at Microsoft tech demos or on a unit installed in Vegas.

Thanks to Pedro Marques (VJ Danger) for the tip!

The ideas here, if in basic prototype form, are already interesting. The design is heavily influenced by (if not a direct copy of) the Reactable, down to the connectors between nodes.

Visuals arguably work even better, though, because they can be shown directly in a way sound cannot.

In this prototype, you can’t do much that you can’t already do with conventional visual software. But already, there are two significant, fundamental advantages. One is, having a nodal visual interface gives you really open-ended possibilities for setting up a set. Conventional software also relies on you to configure the modules you need in advance of performing. With this interface, you do it all live as you go – just as you can do with sound on the Reactable. Secondly, as the video points out, you can collaborate more easily, without fighting over knobs on your MIDI controller.

I couldn’t help but laugh at this particular frame from the video (which also, amusingly, heavily features Resolume v2): 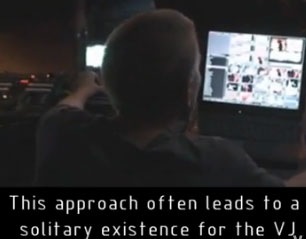 Yeah? Speak for yourself. Us VJs are fighting the boys and girls off. We’re like fresh meat in a shark tank.

This solution is much better. Now people can get beer all over the inside of my multitouch controller. Give me the solitary existence any day.

In all seriousness, it’ll be interesting to see where all of this leads. What I’d really hope is that the new interfaces actually expand some of what you do as a live visualist, rather than just duplicating tired, old VJ techniques with a flashy new interface – and I think this tends dangerously in that direction. (Why not use the opportunity to try something new?) It’s useful as a demonstration, though, so long as people keep going and try some other ideas.

In the meantime, we’re still working on creating our own new interface research – and you can join us:

Mash-Up Video Inside Ableton with a MIDI-Controlled Plug-in