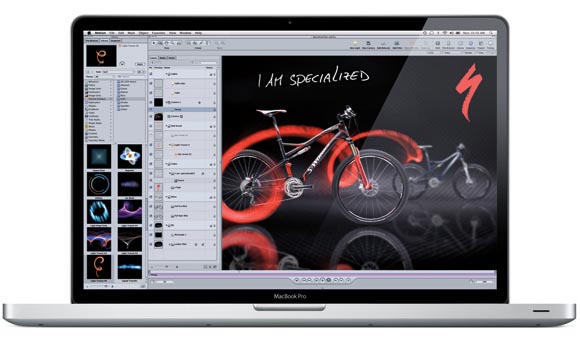 Motion, a bicycle for the mind. Or a tool for making faux 3D bicycles, at least. Image Courtesy of Apple.

Apple announced updates for both its pro suites today – Final Cut on the video side and Logic Studio on the audio side. And in short, we have lots and lots and lots of small updates. Of course, for loyal users, those are often the best kind. Here’s a quick overview, with more detail to come.

Final Cut Pro itself first – here are some of the features that caught my eye:

Motion continues with the 3D treatment, with some pretty striking results. Motion isn’t necessarily a replacement for a lot of popular tools, but it continues to do a lot of slick effects with far, far less work – now with shadows, reflections, depth of field, camera framing, and a number of new text and glyph tools. You can also do fake bad film settings. Couple that with the amusing new turntable simulation in Logic and, I swear, you’re ready to go work for MTV – cliches ready to go. (But seriously, this otherwise looks nice.)

The biggest improvement in Motion by far, though, is that optical flow retimings work the way you want. Instead of calculating analysis for your entire clip, it focuses on the part of the clip you’re using. Having to analyze entire clips pretty much crippled this feature before, so this is a big relief.

Soundtrack Pro gets a number of improvements, including better time stretching. For video producers, though, voice-level match, noise reduction, and iXML data from the field (if you take the time to add such things, cough) are the big enhancements.

Compressor is called “3.5” but this is one of the bigger updates in the batch, with automation for batch workflows via templates and something called Job actions, drag and drop auto-detect for presets (nice), image sequence support, and Blu-ray compatibility, plus distributed encoding that can go even beyond a local network.

Here’s a guilty confession: I’m glad I don’t have a product briefing on Final Cut. There are just a huge number of little enhancements. But at the same time, it’s nice to see Apple this focused on refinement rather than whiz-bang features. We’ll know when it ships if they’ve pulled that off, but my inkling is that this may please existing users even if there’s no splashy headline (maybe because there’s no splashy headline).

What’s not here: 64-bit support, as covered here separately. (But, that is to say, we basically haven’t gotten a story from Apple on what their plan is for 64-bit creative apps.)

Final Cut users, what features are you happy to see? What do you think is missing?

MacSoftware
SynthieCat gives Ableton Live the deep matrix and effects of the 1971 EMS Synthi A
MacSoftware
AudioSlide plays advanced MPE ramps even without hardware – Max for Live
MacSoftware
data.train Max for Live instrument-effect mangles and transforms any sample or source
Software
PsyTexx is a forgotten tracker for Palm PDAs – with features like distortion