Mobile Projection with a Chihuahua

No, you’re not misreading that headline – it’s exactly what it sounds like. It’s a dog with a mini projector (and in some cases, a camera, apparently) strapped to his back. I’m not exactly sure this is something I would choose to do with a dog, but video artist Fernando Llanos says the animal is earning access to globe-trotting through gourmet food:

t I didn’t care, he’s my dog and he has to work, it’s like in a circus, there’s a price the animal has to pay, in order to eat foagra in France and jamón in Barcelona.

And such is the latest oddball interview from our Australian-based friend Jean Poole, a writer with his finger on the pulse of the global visualist scene. Fans of his writing should note there’s a new RSS feed to follow and lots more where this story came from:

I’m just going to stick with playing tug and rubbing dog’s tummies as canine activities, and I’m certainly not advocating or condoning this four-legged projection method, but it’s good to know Jean Poole is bringing us the world of visualism. I’m subscribing, for sure.

And that is a really cute dog. 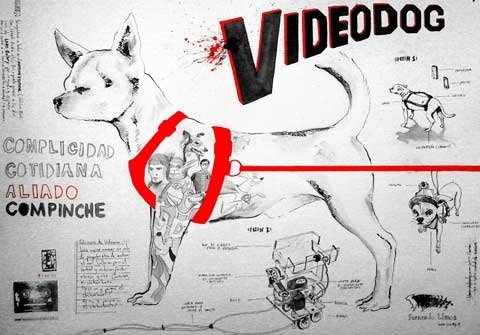 Gorgeous Full-Sized Hammond B3 Controller for Native Instruments B4

artistsinterviews
Trace the Black roots of disco, house, and techno in videos and reading – summer school is in
artists
Hard as queer: Brutal Gegen releases and videos capture a party that’s defiant as ever
mobileoddities
Crank it up: A noble and elegant simulation of playing French Horn for Playdate
artistsblogs
Darwin Grosse, musical visionary and voice for Max and DIY learning, has passed away