Ready to evolve past the mouse and keyboard? Squidy helps bind together all the possible “natural” user interfaces by putting touch, ink, speech, and vision and tracking together in a powerful set of libraries. In other words, if you’ve got a novel interface, Squidy will help you not only make sense of it, but use standard protocols to route expressive data from the input to other good stuff. With the power of TUIO, the set of conventions built atop OpenSoundControl, that means your weird input device can get routed to your Processing visuals or robotic bass guitar player or Kool-Aid-squirting fountain.

As the creators explain it:

The visual interfaces is fascinating; it brings all these complexity into a single, patchable, graphical interface (pictured at bottom).

And now it means even Microsoft’s Surface is getting a healthy dose of standards, bringing TUIO to Microsoft’s futuristic table. reacTable / reacTIVision developer and TUIO creator Martin Kaltenbrunner writes CDM:

Researchers from the University of Konstanz in Germany created a Surface-To-TUIO bridge for the MS Surface. This means that all TUIO enabled open source applications can now be run on the MS Surface without modification! 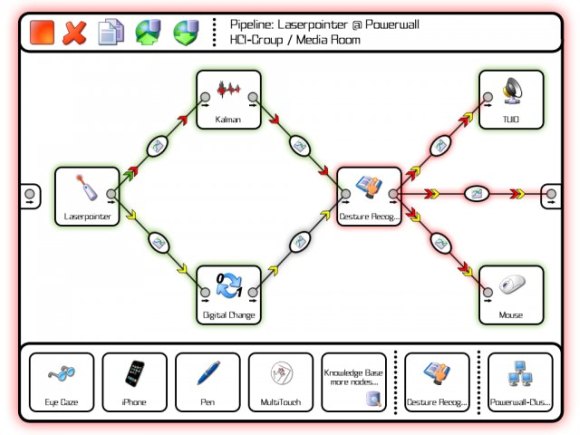 Here are some more fascinating interface design videos from the folks at Squidy, showing off their natural, zoomable interfaces.

The development environment itself looks fantastic. Check out the iPhone control and how zoomable interfaces lend themselves to development.

These projects in turn are developing some terrific ideas for zooming around information.

design
Atari, at 50, leaves a legacy of electronic imagination in visuals and sound
design
Check this fanciful “old-school” retro tracker hardware and a cute groove
awesomeness
Weddell seal vocalizations are cooler than your synthesizer, and we’re still learning more
inspiration
Hard as queer: Brutal Gegen releases and videos capture a party that’s defiant as ever