It’s a testament to the power of digital visuals that flat, 4:3 or 16:9 rectangles can be endlessly fascinating — just as some of the greatest music records of all time were produced in mono. But part of the reason why resources like the Video Projection Tool excite us is that visuals can move from the two-dimensional plane to the three-dimensional surface, from painting and film to sculpture and architecture.

Or, to explain why this is all so cool in just two words: LASER CAVE.

The visuals are built in favorite semi-modular, Mac-only visual dynamo VDMX from Vidvox.

If you’ve seen this already, apologies – though it’s probably worth watching again. And meanwhile, the LASER CAVE audiovisual installation is just one of Suryummy’s audiovisual works. The artist, aka Emmett Feldman, has developed a unique visual style in which primitive geometries and grids, recalling the glowing lights of Tron, overlap with playful cities and luxurious, crystalline materials. His world effuses warmth, back to his earliest work; light is always present and always somehow sensual, even if floating through cities of prisms or the emptiness of space.

In fact, what’s most impressive to me about his projection-mapped materials is that his two-dimensional illustration has some of the same ideas and style; nothing is artificially imposed here. 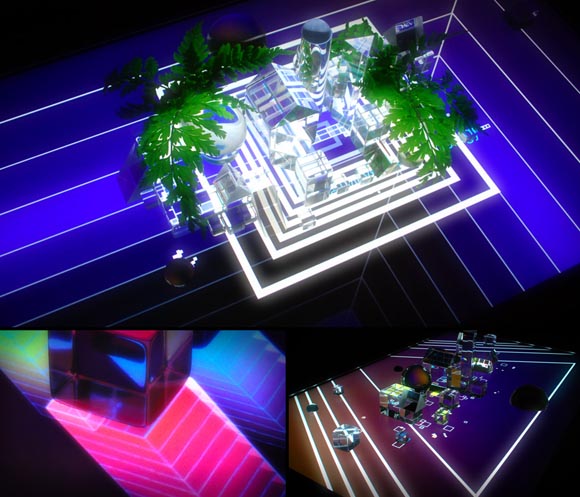 And here’s one more trip into the laser cave: