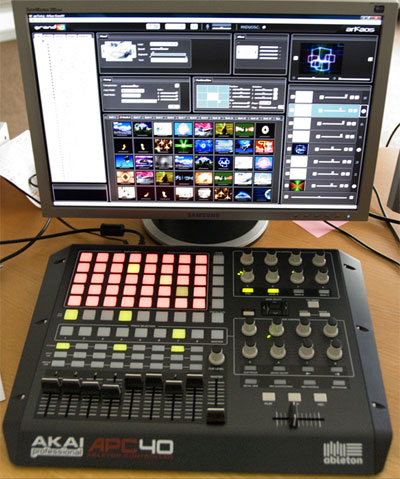 GrandVJ, ArKaos’ Mac/Windows, ground-up new software (replacing the legacy ArKaos product) may have had minimalist beginnings. But recent builds have added some really powerful features. Most importantly, there’s more elaborate two-way controller support. There’s a preset for the Akai APC40, but other hardware – like Livid’s Ohm64 and recently-announced Block, the classic monome, and the svelte Novation Launchpad – should work, too.

Now I just need one more feature – the, erm, time to sit down and learn how to build FreeFrameGL plug-ins.

For more on the Flash integration, there’s an updated 1.2b1 post.

What I like about GrandVJ is that its stripped-down interface and focus on high performance take it in a different direction from some of its rivals. It doesn’t have extensive modular support, as does VDMX on the Mac, or an emphasis on audiovisual performance, as does the new Resolume Avenue. It’s a straight-up, clip-focused high-performance engine. But its layer support, plus the ability to mix in, say, your own custom-coded plug-ins or Quartz Composer patches or Flash interactive animations could make sets in GrandVJ far more than just the usual two-channel video mix. There’s no question it’s a contender.

Tons more on their blog:
http://www.arkaos.net/blog/

Virtual Radios Made from Paper, RFID