I’m headed to Boston next week for a workshop and evening performance – and that’s the perfect time to share some of the good folks I get to work with. You can catch them in person if you’re in the greater Boston area, and expect more on what they’re doing here online following the event for the rest of the planet.

The monome is an undifferentiated array of light-up buttons. Nothing about it really has to control music – it could be used for visuals, or orchestrating an army of small robots, or triggering pyrotechnics. Kedaar Kumar is one of the multi-disciplinary performers who crosses between music and motion. The video at top shows a little peek at his generative work, behind monome inventor tehn (Brian Crabtree). He also has one of the best housings I’ve seen for the monome, in the form of an Etch-a-Sketch case.

For more of Kedaar’s work:
www.soundcloud.com/kedaar
Vimeo playlist
See also the collective of Harmonix employees of which Kedaar is a part (yes, the Harmonix of Rock Band and original Guitar Hero fame). Their album is available free: www.oxytocinmusic.com 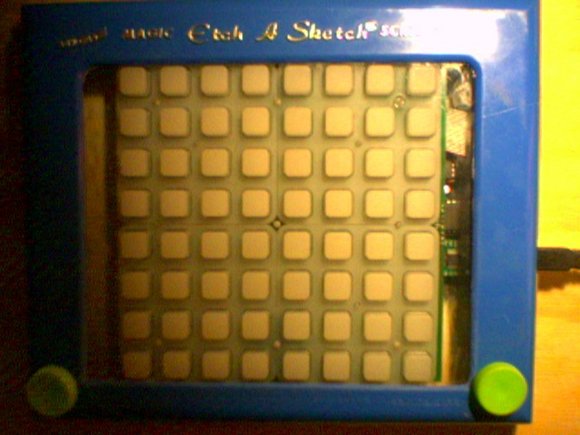 It can be a little tough to wrap your head around it at first, but the monome is a wonderfully powerful concept. (There are two phases I went through. The first phase: “Huh? This is just a bunch of buttons! There’s no velocity sensitivity!” Second phase: “Wait – the simplicity of this is completely genius.”) As an idea, you don’t actually need the hardware itself – really. Adam Ribaudo, the creator of the insanely awesome 7up software for monome, has executed a virtual monome that runs on a powerful multitouch Java framework. Non-physical monomes slide with elaborate backgrounds like Japanese screens, both instrument and visual representation. You can check out all the software at Adam’s site (under the name makingthenoise / mtn):

Incidentally, I’m working on my own quasi-emulator which I’m writing in Processing. I’m doing it from scratch partly because I want to use it as a teaching tool, talking about arrays, objects, and imagining other monome shapes (trinome?) If you are near Boston, design organization AIGA Boston is hosting me for both an introduction to Processing I’ll teach during the day and a free party by night.

Thursday, November 12
9:30a – 1:30p Visual Programming with Processing workshop at The Cloud Foundation – registration required
6p – 9p Social Mixer + Visual Lounge at The Enormous Room (which is a room, though not enormous) – FREE

artists
Paik’s Video Study is a 700-piece archive of the work of Nam June Paik
Hardware
Faded Instruments has a line of candy-colored 1U tools – easy modular stocking stuffers
controllers
The latest 1U tool is a DJ-style innofader crossfader from intellijel
Hardware
The best Cyber Monday deals you can get now on synths, plug-ins, and more